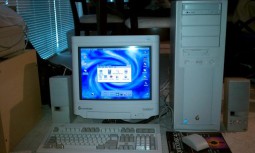 My first real computer experience outside school was on a Gateway 2000 machine. It came with a stalwart Pentium II processor, a 2 GB hard-drive (1.95 on mine), CDROM drive, a monitor with a surprisingly good resolution, could run all versions of Windows 98 (my copy was genuine) and a full featured copy of Office 97.

Then XP happened, followed by a Vista disaster, which was fixed in Windows 7, messed up again in Windows 8 and today I find myself staring at a Windows 8.1 desktop- well sort of.

They have Metro now and I shudder to think, what sort of mischief do they have planned in Windows 9 now that Steve Ballmer is gone? A desktop that breaks out in song at every other interval like in all Bollywood blockbusters?

This past weekend I visited my aunt and saw my first computer in her garage. It was still good when I left it, but it was overtaken by time. Overtaken by a sense of adventure I decided to take it home with me and try and take it for a spin and relive the good old memories when a desktop was just a desktop.

I was also glad to see that my box of 1.4″ floppy disks was untouched and still intact and took it with me. I also found the original Windows 98 CD box, with the original genuine Windows certificate and keys.

The first step in restoring the machine was un-boxing it and ridding it of the years of dust it had accumulated during the years of abandonment. This was the fairly easy part the hard part was getting the sulky thing to start up.

Not surprisingly I could not get it to boot and ended up replacing the hard drive with a 10GB drive I had procured from the same garage. It might sound paltry in the 1TB world but it cost me a month of lunch money when I bought in back in 2007 for my Ubuntu Feisty Fawn experiment. I ended up downloading a Windows 98 SE ISO from here. The first edition can be downloaded here.

I burned the bootable image onto a CD (these are getting hard to find) since the desktop has no DVD drive and USB was still a suckling back then. I also had to replace the original CD ROM with an Intex one that had fallen into disuse.

After a lot of cursing and swearing I managed to install Windows 98 onto the machine and since I had not intention of using it as an office machine I skipped the Office 97 pain by copying my old documents into the My Documents folder.

Did you know a password prompt could simply be bypassed by typing cancel during the trusty old days of Windows 98? Now you know all those stories about leaving a sack of money on the street and finding it untouched in the morning are not myths.

When I tried transferring the files onto a USB disk I hit a snag. The Unknown Hardware box kept popping up whenever I inserted the flash disk onto to the solitary USB port. I took to Google and found the driver here, downloaded the Second Edition driver onto my Ubuntu Desktop and hit another snag.

Normally all you need to do is transfer the file to a flash disk and plug it onto the other machine and install the application but the Windows SE 98 desktop did not have a USB driver installed so that meant another CD burning exercise. So as to make the most out of it, I included a Windows 98 unofficial service pack that comes with goodies from Major Geeks. After more cursing and reboots I was good to go.

Then I hit the greatest drawback of using Windows 98, because everyone is in a hurry to try the latest new shiny things most user applications out there no longer support Windows 98, why should they when no one uses it anymore?

So although I could still play Pong and Pac Man I could not do much else. Then as I was taking a break from the draining exercise that took a better part of Friday night ( I am a geek) switched to the BBC News Channel there was Kate Russel in Webscape talking about Oldversion.com.

While everyone is on a rat race to upload the latest versions of software applications to their sites, this website is dedicated to being an archive of all the good old versions that just worked and did not require some super-fast internet connection just so you could activate them.

The site reports it has over 17 000 versions of old software for slightly under 700 programs most of which work well under Windows 98. This is very useful if for some reason you want an earlier version of software: perhaps it is the only one compatible with your Operating System, the latest version breaks your installation or lacks some essential feature that you require.

The site even has a dedicated gaming section featuring games like Duke Nukem, Doom 2, Prince of Perisa (who said Persia?) and the old useful Game/Utility Mario teaches typing to help you get started with your touch typing not that you need it with all those new touch screens taking over with their intelligent capabilities. The site also hosts Linux and Macintosh versions of software in addition to Windows.

Oldversion.com allowed me to go down memory lane and relive the better days. I would recommend it as a purely pedagogical exercise only especially if you want to learn more about the history of computing, make props for shooting an old movie or as a primer to Assembly Language programming ;). Using the software on production machines would just be foolish for obvious reasons.

3 thoughts on “Rewinding time with oldversion.com”