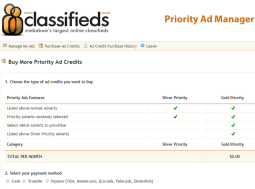 If you’re a Classifieds subscriber then you probably noticed in the past couple of days an announcement by Webdev (the company that owns the property) that they have introduced Priority Advertising. What this is essentially is that now advertisers can pay instantly via Paynow to have their adverts prioritised instantly. This is the big change. In the past the only way to get preferred listing was to get a storefront, for which one would pay monthly using a bank transfer or cash at the company’s offices.

With this change, Webdev are also introducing an “ad credits” system, which is some form of classifieds currency. To buy the priority listing, you need to buy and use these credits. The advantage for classifieds is that they get to store some value temporarily and ensure that there’s always more committed than is being spent immediately. For the buyer of credits, maybe reduced transaction fees as they are not doing an EcoCash transaction every time they are buying something on the platform. 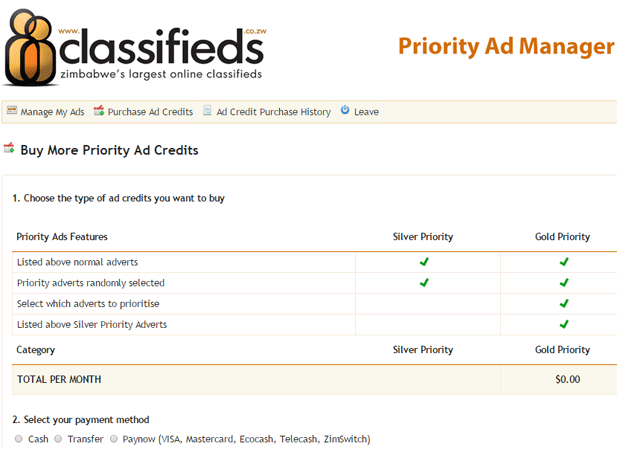 Being able to promote ones ad on the platform instantly is indeed convenient, but not enough – it would be great for buyers to actually pay for the advertised product instantly too and have it delivered.

Not yet, said classifieds Webdev Group Sales & Operations Director, Vusi Ndebele, when we asked about this. He says the platform is technically ready, but ready technically doesn’t mean ready for eCommerce. For now, the company has only enabled it for larger merchants who operate independent websites that have the classifieds.co.zw core delivering the product catalogs. “These merchants already have access to the back-end to select which of their products on Classifieds will be available for immediate sale and set up delivery options.” he said

The important thing for the company right now, Ndebele says, is to educate retailers about maintaining accurate stock data and have a good order fulfillment process to avoid disappointing consumers who expect everything to work without any hitches.

In the early weeks of the coming year the company says it will turn on a “Buy It Now”  button on classifieds for merchants that are ready. And then later this will be enabled for C2C transactions too. Gradual because it’s all about building confidence in e-commerce in the market.

“As a pioneering e-commerce marketplace It’s more important that we build confidence now and avoid general consumer rejection of e-commerce, (specifically on the Classifieds platform) due to a poor experience with unreliable sellers. A major challenge with C2C “Buy It Now” is where sellers list an item, sell it offline and neglect to update/delete the advert. Buysafe  (Paynow Escrow facility) protects buyers funds in this scenario but it still leads to frustration and disillusionment,” explained Ndebele.