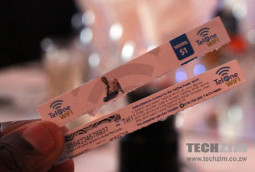 So as you may have read earlier in the article about TelOne’s new brand, and more specifically their new Metro WiFi service. So essentially, to access the service you will need to buy recharge cards like those in the picture, you scratch for a code and you get onto the WiFi. A 100mb for $1 which is pretty good compared to regular 3G prices, but no so good compared to free ofcourse.

In terms of validity, an official of the company told us the recharge card is good for 1 week once you have started using it. They are also apparently considering introducing a time-based model where you buy an hour and you pull down as much data as you want – standard internet cafe model.

As reported earlier, the service will be available at Mupedzanhamo,  part of Julius Nyerere Way along the main post office, 4th street bus terminus, Montagu Heights in the avenues and a few other places.

For the consumer this is great coz it means there’s always a good WiFi network in most places in the city at competitive rates. TelOne’s super cheap one, ZOL’s free WiFi, YoAfrica’s Chili spots, uMAX hotspots and ofcourse the 3G networks for those not watching the cents.

Update: Here’s the part on the lack of integration. Our hope was that TelOne introduce a service that would make it easy for existing ADSL & fibre subscribers to use their TelOne account to connect to these WiFi hotspots on the go. In fashion similar to what Econet is doing with the Econet WiFi Zones.

We asked a TelOne marketing official about this and he told us this is in the pipeline but that investment in that integration did make sense now with the limited WiFi coverage they starting with. Down the road, the company will also likely introduce an app and allow customers to buy WiFi access electronically so they don’t have to find a street vendor, buy, scratch and surf.

8 thoughts on “TelOne metro WiFi is scratch card based, and not as integrated as we hoped”