We all love YouTube for its huge catalogue of videos but are often put off by the huge cost broadband that comes with getting access to those videos. Which is why it would be great to watch videos even when we don’t have access to the internet.

A few months ago we mentioned how YouTube had introduced an offline service as part of its rollout of the Android One phone. This allowed users to save a video  offline for later viewing in the absence of an internet connection.

YouTube recently followed this up by opening up this YouTube Offline experience to all devices in selected African markets – South Africa, Ghana, Nigeria and Kenya. The good news is that the service is now also available in Zimbabwe.

Once you have selected a video, you can opt to retrieve it from your offline folder and watch it later. the video is accessible for 48 hours and it hasn’t been enabled for music videos. 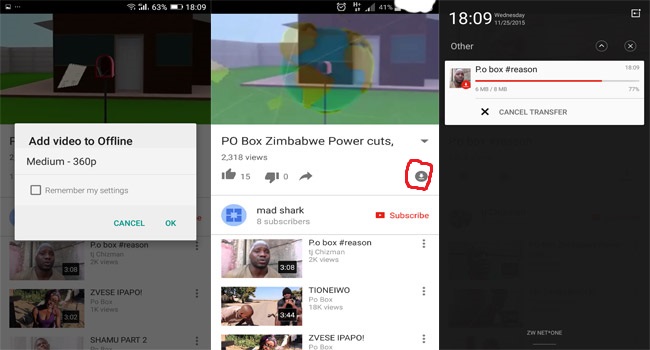 Options for home internet  have experienced a huge growth over the past few years through fibre, WiMax and ADSL packages, but the majority of Zimbabweans still use the internet through their phones.

At the same time, mobile broadband from the three mobile operators hasn’t been the cheapest option for accessing the internet, creating consumption patterns influenced by occasional access to fast and free data, as well as through Over The Top bundle services.

As such this “minor offline feature” is an interesting development for Zimbabwe and it’s something that ought to prove valuable for the scores of internet users who get access to unlimited or fast broadband at work or from a WiFi hotspot.

For content producers, it expands the potential viewership of content while providing an alternative for video distribution beyond Facebook which has been relied on because of Over The Top Services like Facebook Bundles. There’s a wave of online-first/online only content distributors that have blossomed over the past two years who will see this as a much-needed pillar of support in their distribution model.

The offline feature also means that the WiFi hotspot model has been reinforced by a new set of users will probably be stopping over to use this discounted broadband to download YouTube videos for offline consumption.