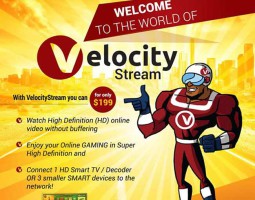 If you’re considering fibre as an internet option for either home or the office, the motivations are a bit obvious. It has a number of undeniable advantages that help bear the huge cost that you have to meet to get it.

Super fast internet, stable connections, not having to worry about videos that take forever to load and of course, the high-speed downloads. That’s what we all want these days anyway.

Telco, a local Internet Access Provider which has also been providing a fairly competitive fibre option has its mind on ensuring that fibre users that want the essentials of fibre and more importantly the best in streaming capabilities get just that. The team there has tried to capture this in their new service, Velocity Stream.

According to representatives from Telco, the Velocity Stream package offers optimised streaming capabilities and provides High Definition viewing of videos and an HD experience for online gaming.

Users of Velocity Stream can connect an HD smart TV or 3 smart devices to the network and enjoy this HD experience along with online video that isn’t buffered.

Velocity Stream is pegged at $199, which places it, in terms of price, just below Velocity Extreme, Telco’s premium Fibre package.

Telco wants users of Velocity Stream to not have any of the occasional compromises that other fibre connections meet when streaming (internet speeds can sometimes slow down), while ensuring that there is still the basic fibre connection that you need for other forms of internet use.

This sounds like a solid proposal, especially with the placement of streaming as a core element of the Velocity Fibre experience. However, the fact that Telco is just proving this service without any tie ins with specific Video On Demand (VOD) Services make it seem like just another addition to its Fibre packages menu.

There is an opprtunity for VOD services, especially local ones that are focused on the Zimbo content angle, to offer bundled services with Telco’s service, assuming that they can provide the right sort of value proposition that Telco would want to sell to its subscribers.

All this is assuming that Telco doesn’t play around with the idea of content curation itself. This is not such an obscure idea, considering that other IAPs areound the world that are chamiponing fast internet trough fibre have been entering this territory. Even Liquid Telecom is winding up to throw in its own VOD service, ipidi in several markets including Zimbabwe.

Maybe ipidi could also be pushed through Velocity Stream, something that helps Telco add lustre to its fibre, while giving greater entry points for ipidi into people’s homes, beyond just the ZOL and Hai ISP arrangement.

The Fibre service-meets-VOD arrangement bolsters the fibre service by unboxing its main advantages while giving some sort of justification for the huge price tag. If you’re going to pay over $175 for a utility you might as well get some other services that come with it, but presented in a convenient way.

5 thoughts on “A look at Telco’s Velocity Stream, a package optimised for gaming & HD streaming”