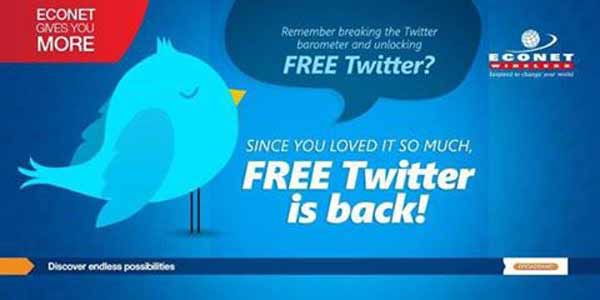 Twimbos have a reason to celebrate. After almost a full year since terminating the promotion, local mobile operator Econet Wireless has brought back its free Twitter service for a three month period. The reintroduction was announced on social media.

Econet first introduced a zero-rated Twitter service in July 2014 after creating buildup through a social media campaign on the micro-blogging site that prompted followers to retweet if they wanted the service.

Running as promotion and not a regular service, Econet extended the Free Twitter service repeatedly before retiring it in February 2015, after which the option for free Twitter was extended to subscribers using the Opera Mini bundles.

At face value, Econet’s play seems to be a reward to subscribers, but free Twitter services have been used by mobile operators to encourage the use of the social media platform which thrives on shared links that users are likely to follow up on, thereby encouraging data use.