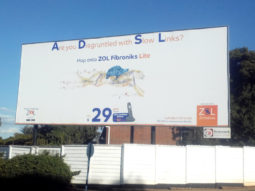 Recently we wrote on ZOL chasing TelOne’s ADSL market in its quest for growth & dominance. This has been characterized by the very public ad war between the two companies which we feel is slowly becoming an eyesore.

Nonetheless, thanks to POTRAZ’s recently released 2016 Q2 Sectoral report we have been able to ascertain the state of Zimbabwe’s ADSL and Fiber market and both aren’t looking so rosy.

ADSL still holds the greatest market share with 71,116 subscribers utilizing the service. ADSL had a Q2 growth rate of 2.7% albeit in comparison to Q1’s  reported growth of 6.6% recording a 40.9% quarter-on-quarter decrease in active internet ADSL subscriptions.

Both internet services experienced a slump in growth rate from Q1’s growth rate to Q2 growth rate but remained in the positive as illustrated in the table below:

Reasons for the slump in growth may be attributed to the harsher economic conditions that came about at the turn of 2016 with fewer people interested in taking up active internet subscriptions for both ADSL and Fiber. Both services still remained in the positive but with such slumps in growth in won’t be too far fetched to see one of the two reach a negative by Q4.

As we mentioned in our previous articles on the war between TelOne and ZOL consumers would rather see a review of pricing schedules than an ad war between two companies. The Internet is still expensive to most Zimbabweans and with the economy where it is we may see more subscribers opting out of their subs. At this stage, a more focused drive on customer retention through lower prices and better customer service may be needed to avoid a negative quarter-on-quarter growth rate.

You can download a copy of the report here: potraz-q2-sector-performance-report-2016.

4 thoughts on “ADSL and Fiber internet subscription growth down by up to 48%, impact of Zimbabwe’s economic conditions?”