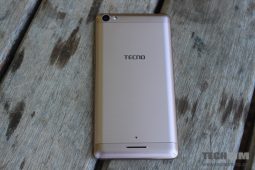 Another edition of the TECNO line of midrange devices, the Tecno L8 is coming in the mid-to-low end side of the mid range smartphone category. Target market is individuals not interested in cutting edge specs but just a basic device capable of lasting a lifetime before crying out for a charge and carry out normal day to day tasks just like any other Android smartphone. How it fares out in the real world? Let’s find out. 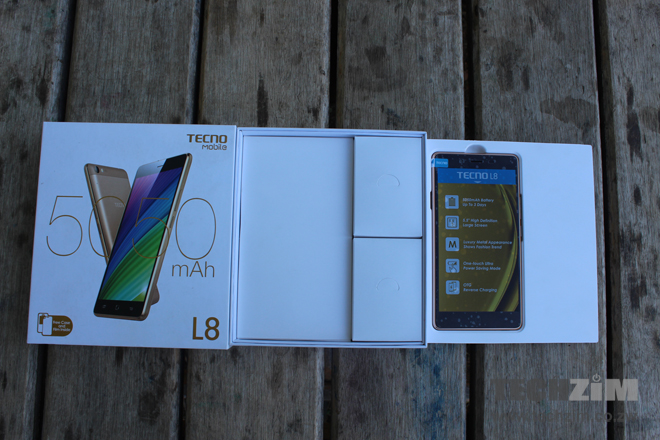 The packaging shows they took time to ensure it looked as presentable as their better offerings and it has a pretty healthy list of accessories considering it is a $150 device. 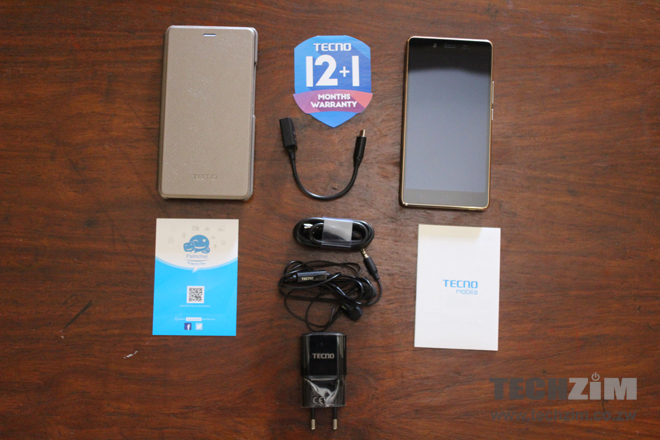 The TECNO boasts a 5050 mAh battery and has reverse charging enabled so it can charge other devices hence the USB OTG cable. More on that in a bit.

The face of the device is graced by a 5.5 inch IPS LCD of 1280 x 720 HD resolution. Sharpness is decent though a Full HD panel can’t be too much to ask for. Above the display is the earpiece dead center, a 2MP front snapper to its left and a light and proximity sensor to its right. 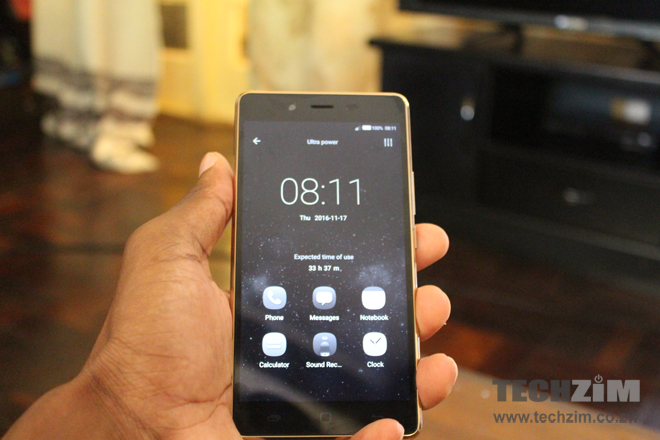 Below the display you get the navigation keys which I personally prefer off screen (one up for the L8 here) but the keys aren’t backlit which is a bother when using the device in dark situations. The design of the virtual keys is also a love/hate affair with one of my comrades from the office saying,” They have too much going on, the Camon C9 did a better job.” 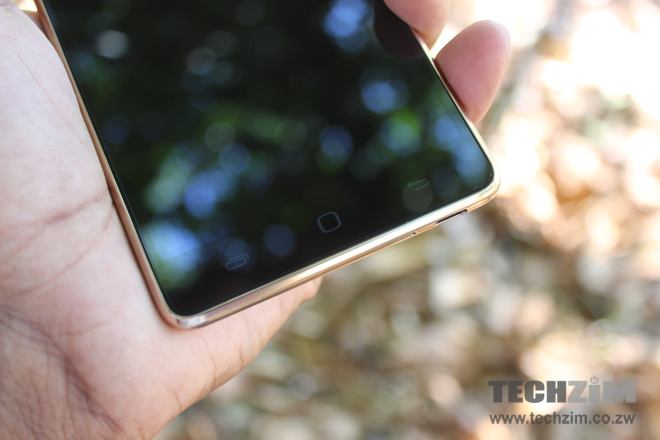 On to the edges we have the top of the device housing the 3.5 mm headphone jack. The right side of the device is home to the usual that is the volume rocker on top and the power button just below it.

The left side which is usually barren has been populated with another key which at first i thought was the weirdest position for a camera button only to find out it is actually a toggle for the Ultra Power Save mode. It’s a new take on hardware keys and pretty interesting how TECNO is adding more physical buttons whilst more and more manufacturers are eliminating them. 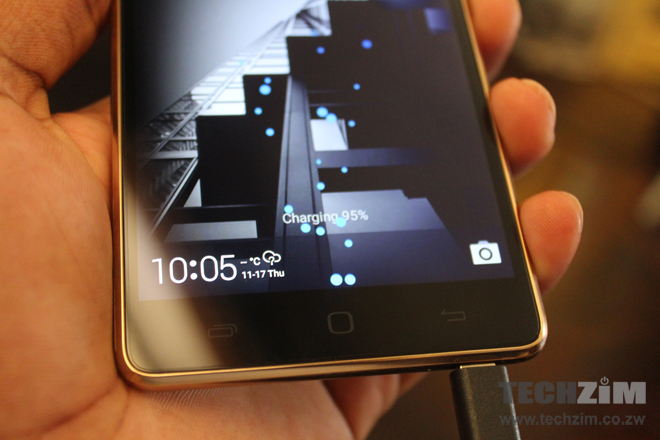 Now on the L8 there is the same feature but now the charging port is all the way to the left of the device and in terms of visual aesthetics it looks off. It by no means has nothing to do with performance of the device but for the keen eyed might be an eyesore for the 8 seconds that the lock screen is active.

The back of the device is metal with plastic bands on the top and the bottom. The top far left resides the 8MP camera with an LED flash just to its right. The bottom of the device houses the loudspeaker slit and it doubles up as a groove to help you remove the back cover.

Don’t get too excited though, the removable back cover only gives you access to the 2 SIM trays (full size macro sim for sim 1 slot and micro sim for sim 2 slot) and the microSD card slot. The 5050 mAh battery may be in full view but it is non removable and comes littered with warning labels as is the case with the other Tecno devices we reviewed. 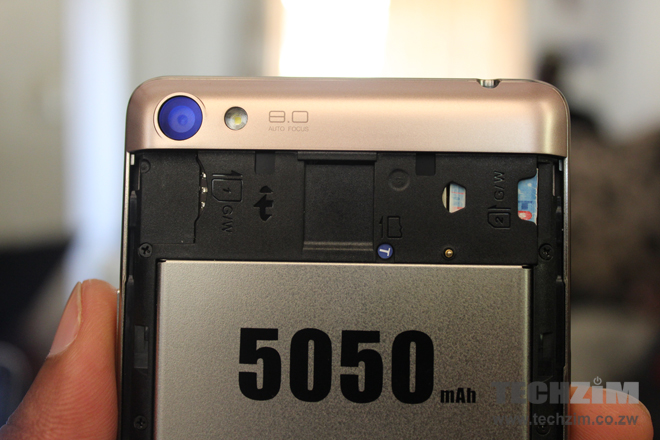 The metal finish is a nice approach considering most devices in this price range are largely plastic and I love how resistant it is to fingerprints. Overall design is good except for how chunky it looks and the weight (184g) that comes with it but that is the price to pay for such a huge battery.

The TECNO comes in with a basic camera combo that is an 8MP rear camera and a 2MP front camera. The main camera provides decent images. Videos are taken at up to 1080p Full HD and have a consistent frame rate but the camera struggles to focus when taking video. Pictures come in with their fair share of noise which makes them look very grainy especially when in low light environments.

Selfie camera is enhanced with beautifying software but at a resolution of 2MP there is only so much software can do. In this department we would have loved a higher resolution camera. 2MP is soo 2013 even for mid range standards. For comparison the Camon C9 has a 13MP front camera and it costs just $50 more.

It is however capable of capturing 480p (640 x 480 pixels) video with the front camera and again for some decent shots you may need nothing short of excellent lighting.

Straight to the good stuff. The L8 music player brings back the graphic equalizer to fine tune your audio experience. Interestingly the graphics equalizer has presets grouped in 3 categories that is Normal, African and International. Its very warming to find a graphic equalizer with presets for African genre of music and TECNO might be the only manufacturer thinking so much of Africa. 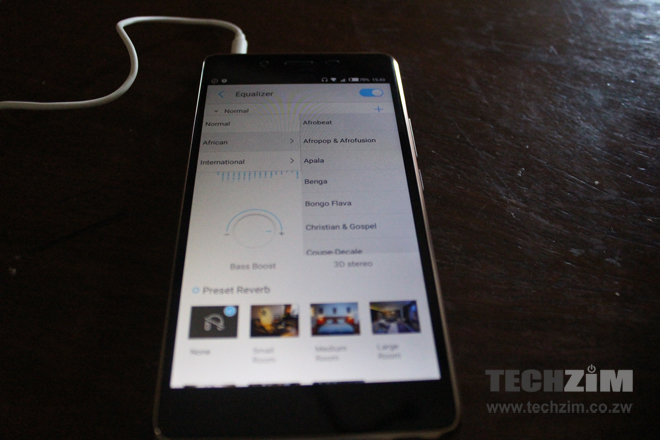 That said you also get a 5 band equalizer to fine tune your audio to your precise liking that is if the multitude of presets just don’t cut it. There are also Reverb presets for adjusting the amount of reverb. I heard no change when I cycled through all of the presets though. Also with headphones connected if you switch on the equalizer volume levels drop drastically and the slight boost in audio quality does not justify the trade off in volume levels. 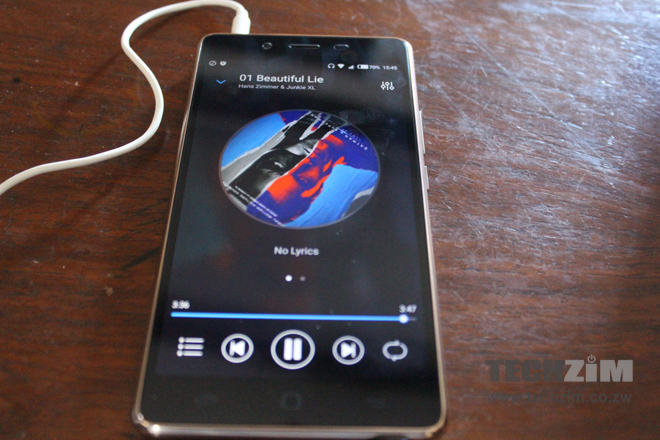 Switch the graphic equalizer off and the audio output is very decent with mostly clear output and fair volume levels. It could use a tad more low end bass but otherwise it’s a pretty decent offering from the L8.

The loudspeaker is good with nice volume levels at 76 decibels and decently clean output. It could use a bit more low end bass for richer sound but the overall delivery is pretty decent.

Connectivity is the basic package offering up to 3G connectivity, wifi and bluetooth. Sadly there is no 4G LTE which is a shame considering it has a battery that can handle it but if it’s any consolation it support USB OTG functions that include reverse charging for charging other devices, and also for viewing and modifying contents of a flash disk directly from the phone. No CDMA support as well which means a sad day for Africom and Powertel subscribers as well. 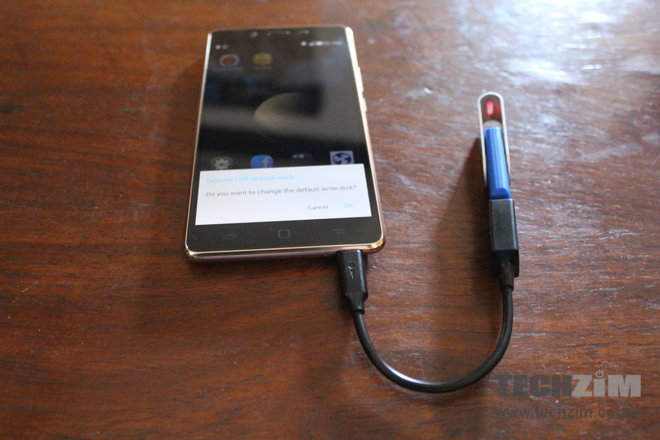 This department is where the L8 comes alive as it is mainly centered on how big the battery is. It packs a chunky 5050 mAh power pack under its back cover which is a whole 30 mAh more than on the Gtel we tested a little while back. It comes with a dedicated hardware button for toggling the ultra power save mode on and off just so you know it’s serious about staying alive long after the rest of the competition has fallen to the mercy of the charger. 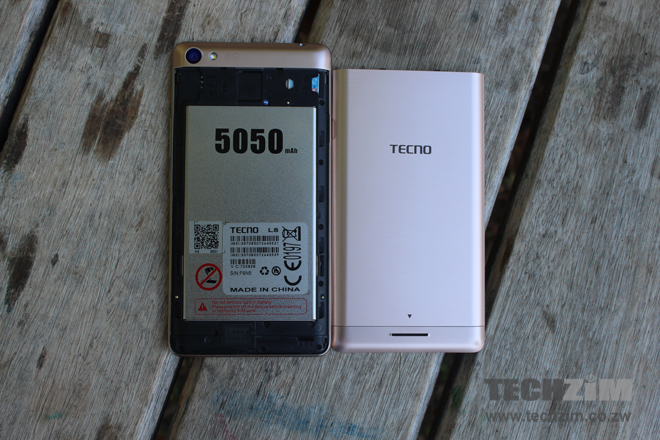 Under normal usage you will struggle to get the device below 50% in a full day worth of usage which is owed to a low resolution display and a low end chipset meaning less demand of juice from the hardware. this is clearly evident in the endurance test where it took a measly hit of 29% to the battery after an hour each of video streaming, gaming and video recording.

This phone lives true to its claim with heaps of battery life thrashing any other device we have tested. People, if all you need from your smartphone is a long lasting battery look no further. The L8’s got you. We would have loved some form of quick charging though to top up the battery as it takes quite a while to charge up the device.

Ticking inside the L8 is a modest 1.3 GHz quad core Mediatek MT6580 CPU bundled with a MALI-400 MP GPU which is as basic as they come. RAM weighs in at 1GB with 16GB worth of internal storage. If you are a power user this is not the phone for you.

The tiny RAM and entry level chipset results in average to poor multitasking.  Open up a number of apps and performance drops with quite a bit of stutter when flipping through home screens or switching through apps.

Normal usage on the other hand is mostly fluid with just a little stutter here and there but nothing serious enough to make you hurl it at a wall. On Antutu 6 it managed a score of 25127 which is a respectable score for a mid-range device translating to a smooth experience under normal usage.

I have to mention that this is a $150 device and comparing it with other devices in its price range it is a pretty solid performer.

One thing to note, the L8 remained surprisingly cool during benchmark as well as endurance tests which we feel is a plus and can be a big deal for some. Its one of the coolest running devices I have tested to date maybe even matching the Boom J8.

You can change the functions of these letters in the settings menu and customize it to launch an application of your choice and you can also take a screenshot by just sliding 3 fingers down the display.

+ Phenomenal battery that can last you days between charges.

+ Charging other devices from its big battery.

+ Music controls from a locked display.

– Could use more RAM.

– Cameras could be better.

– No backlight on navigation keys.

The TECNO L8 is not a perfect device, but perfection is subjective. If you want a phone for its battery the L8 will be a gift from the heavens. Again the battery of this device is nothing short of phenomenal and yes to some extent the efficiency is at the expense of performance but for the price tag of $150 very few devices at that price can perform better.