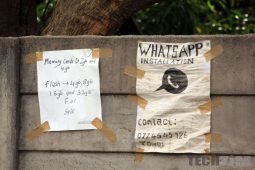 WhatsApp is that kind of app that just works. Unless some government blocks it ofcourse. So it came as a shock for most people globally a few hours ago, when the app stopped working, that it could stop.

In Zimbabwe, like elsewhere in the world, #WhatsAppdown trended on Twitter as people complained that their messages were not going through. The service was restored after 2 hours.

Responding to Reuters on the issue, WhatsApp confirmed the worldwide outage.

“Earlier today, WhatsApp users in all parts of the world were unable to access WhatsApp for a few hours. We have now fixed the issue and apologize for the inconvenience,”

With now more than 1.2 billion people using it actively around the world, WhatsApp is now the defacto communication app for people with access to the internet, especially outside the US and Europe.

In Zimbabwe, WhatsApp is used as both a communication tool and an internet content platform, thanks to the things called WhatsApp bundles. It is estimated that WhatsApp has some 5.2 million users in Zimbabwe. This is why it was a big deal when WhatsApp was down for about 6 hours last year after the government apparently issued a directive to have it shut down.

What’s interesting with the outage today is how a technical problem at a company in the US can cause a huge communication blackout out here in our small country of Zimbabwe.

Even more interesting is how this communication outage in Zimbabwe has an impact economically and, if the government-ordered outage last year is anything to go by, politically. Essentially, WhatsApp has some level of economic and political power in Zimbabwe, and indeed globally. However insignificant it might seem right now, that power is there.

To be clear, I’m not suggesting that WhatsApp is using this economic and political power in any direct way. It’d be clearly unwise for them to even attempt as it’d be a sure way to attract the kind of problems that can kill their company quickly – like governments finally having justification to permanently ban it in their countries. Or users just uninstalling the app en masse panicked about having their data owned by a political company in the US.

In a February 2017 update published by Mark Zuckerberg on Facebook called Building Global Community, the Facebook owner shared how he saw his company playing a central role in the world in, among other things, helping “people build a civically-engaged community in a world where participation in voting sometimes includes less than half our population” (you should read the full update).

Of the analysis of Zuckerberg’s views, I found one called Manifestos and Monopolies quite insightful. You should read it if you have time, but let me just put an interesting extract here:

Zuckerberg not only gives his perspective on how the world is changing — and, at least in passing, some small admission that Facebook’s focus on engagement may have driven things like filter bubbles and fake news — but for the first time explicitly commits Facebook to playing a central role in effecting that change in a manner that aligns with Zuckerberg’s personal views on the world.

It all sounds so benign, and given Zuckerberg’s framing of the disintegration of institutions that held society together, helpful, even. And one can even argue that just as the industrial revolution shifted political power from localized fiefdoms and cities to centralized nation-states, the Internet revolution will, perhaps, require a shift in political power to global entities. That seems to be Zuckerberg’s position.

And, as far as shareholding goes, Zuckerberg controls Facebook.

One thought on “Of WhatsApp’s 2 hour outage, and the political power an app can have”