In April, we wrote about TelOne’s plans to launch a video streaming broadband package for its ADSL and fibre customers. Today, a notice was published in one of the national newspapers showing the details of an application made by TelOne for a broadcasting licence. The licence being applied for it specifically for a Video on Demand service, similar to Netflix or Showmax.

Around June, TelOne almost launched such type of a service. The service was to be called Digital Entertainment on Demand (DEOD). It was going to offer video streaming and live streaming services to people on the TelOne network. However, due to unknown reasons, the launch of the service never saw the light of day.

Some of the other interesting details in the notice are that the licence area is national. Does that mean there is a licence for a person to broadcast subnational or within a particular province? Would such type of a regulation work given how people can access content on the internet from any geographical location?

What will BAZ do if people start to consume your content if it is outside your licence area? You might need a licence if you are storing the content to be consumed on equipment that is on Zimbabwean soil but what if it is stored in America or somewhere outside the country? Do you still need a license?

These are some of the questions that come up when the topic of licensing video on demand services like DEOD and Netflix come up. We have reached out to Broadcasting Authority of Zimbabwe to get answers to these questions and we will let you know once we have them. However, if you have tried to license such type of a service, do let us know how it went and if you did need a licence and what the reasons for having one were. 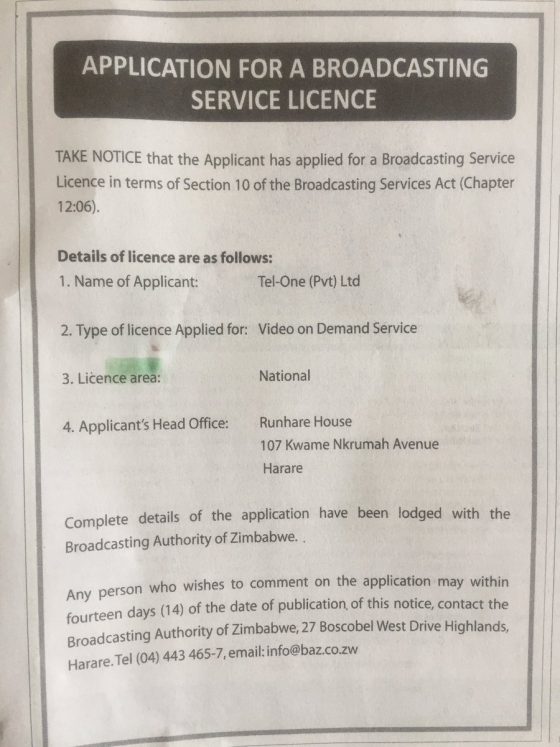