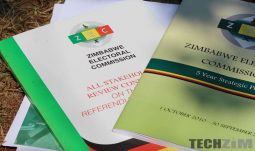 So everyone is excited about the 2018 elections; well, for reasons I’d rather not say. It’s also interesting how everyone is telling everyone to go register to vote but the real question is how many have actually done so? (And no, I’m not going to answer that).

Nonetheless, not to shift blame (technically I am but let’s just go with it) but the fact is, it hasn’t been made easy for people to register particularly in urban areas. Major cities like Bulawayo and Harare (excluding Chitungwiza) only have one registration station apiece, which only open on Monday to Friday from 0800 hours to 1645 hours. Does that even make sense???

That’s all good except for one thing;  there are so many registration stations now and with the way the information has been chunked, finding one nearest/more convenient location for you can be a problem. In fact, the print out of all the stations for the four phases took up about 15 pages of the newspaper. Of course, if you’re serious about finding it you will find it but why make life hard when it can be made easy???

Postal and Telecommunications Regulatory Authority of Zimbabwe (POTRAZ) recently won a Certificate of Excellence Award at the International Telecommunications Union (ITU) Telecom World 2017 held in Busan, South Korea. What baffles me is how though with such an award, we still cannot solve simple real life problems such as the one presented above. For example, why not have an app version (web or mobile or even better, both) of the list of places in which we can register for the 2018 elections?

We keep talking about how we are embracing technology but I believe it starts with such basic things. In fact, once people use tech for such fundamental things, it will be easier for them to then appreciate the tech direction we plan to take.

So instead of just having the registration stations on an excel spreadsheet, we can cater for the not so excel savvy person by creating an app with the simplest of UI where one can just punch in their location and get the closest options at which they can register.

Well, maybe ZEC can’t or won’t do it but one thing is certain; someone will. It might not be you but definitely, someone will.

And BTW, You can thank me later.

7 thoughts on “Why won’t ZEC make it easier for voters to find their registration locations?”