At this moment it is still unknown as to what the cause of the problem is, but ZOL’s Customer Care support line states that there is a “core platform failure”. No reasons are being given as to the cause of this but because ZOL is highly likely to be riding on Liquid, it most likely was due to the latter.

TelOne’s internet going down affects as many 340,000 potential users, based on data that is contained in the POTRAZ Sector Performance Report of Q2, 2017.

Businesses who relied on the two internet access providers were severely affected and any online based  activities brought business to a halt.

At Techzim, where we use ZOL as our primary internet link, we were unable to post any articles as well as read updates.

WhatsApp on Telecel salvaged the day as NetOne’s access was intermittent, briefly re-appearing during the outage for few minutes but then disappearing faster than US dollars from Zimbabwe’s formal economy.

However, the frustrations of a “bundled internet” (where users can only access certain parts of the internet due to them having bought bundles) were evident and made calls for a net neutrality discussion even more pertinent now than ever.

There are no indications that this may be politically motivated however as Techzim continues to investigate the cause and establishes the reasons, we will update.

UPDATE: TelOne Internet is now back up. Here’s a statement below from TelOne. 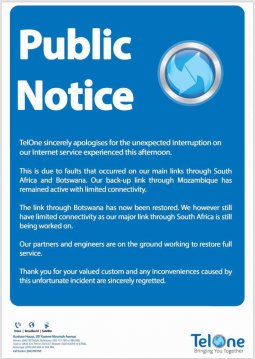