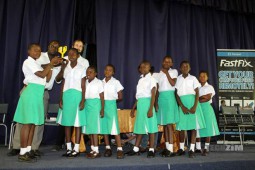 Remember a little over a week ago, we wrote on how the new minister of Primary and Secondary Education of Zimbabwe, Prof Paul Mavima had announced that the ‘new’ curriculum (aka the Dokora) was under review? Looks as though the review phase is over, a decision has been made.

The Herald today reported that Prof Paul Mavima on Monday had a meeting with provincial education directors, district schools inspectors as well as education inspectors. At that meeting, the minister spoke on how the new curriculum could be better implemented; thus insinuating that the Dokora curriculum isn’t changing.

Prof Mavima expressed how the new curriculum had the potential to turn the nation into a more industrialised and mechanised country using technology, and as such, the new curriculum is our best shot i.e. as far as primary and secondary education is concerned.

The reasoning is that the new curriculum allows for students to be exposed to technology (namely the internet, ipads, smartphones and laptops) at a younger age and therefore, they get acquainted to it earlier and appreciate it even better.

One of the major reasons why the new curriculum was/is facing resistance is the question of how to implement it, especially in communities which have no access to neither these gadgets nor the internet. In that meeting, Prof Mavima revealed that the government has acquired teaching and learning material worth $9 million, which will be distributed soon to that cause.

Also in the same meeting, Prof Mavima mentioned his plans of establishing science and technology hubs in every district meant for 15 -18 year old students. These I’m sure will be quite useful in areas where resources needed for this new curriculum are limiting.

Lastly, the permanent secretary of Primary and Secondary ministry, Dr Sylvia Utete Masango who was also present at that meeting, emphasised on the importance of everyone in the ministry to understand this new curriculum and embrace it. This, in essence, will ease the implementation of the new curriculum and hopefully help achieve the targeted results.

One thought on “The “New” Curriculum Isn’t Going Anywhere”