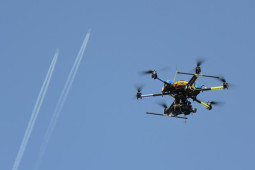 Drone Racing is emerging as a world-wide sport and I’m not sure exactly when drone racing started but around 2014 it began to gain steam in Australia. You’ll be surprised to learn that there’s a drone racing community in Zimbabwe (at least, I was) and they’ve been operating for several months now. Let’s talk about Drone Racing Zim.

The first racing event was held in October 2017 during the annual St Johns Spring Fair. According to Tawanda Chihambakwe, the brains behind the project, the turnout was quite positive and they had more people than they had initially expected.

A friend of Tawanda’s introduced him to drone racing 2016. He was intrigued and began following some drone races online and this only led him further down the drone-shaped abyss. In our communications with Tawanda, he said:

I believe Zimbabwe could benefit immensely from drone technology and drone racing is a fun way to engage and encourage young people to get into the drone industry. I would also like to see drone technology become part of the mainstream school curriculum since the heart of the tech is found in STEM programs.

Little known fact: The drones that are used for racing are not the same ones used for photography/videography. Racing drones are built more with speed and agility in mind and some of them have no cameras at all.

Where are the races held?

Thus far there have been 3 events since they started in October and these have been held at various open spaces and sports clubs around Harare. Tawanda did inform us that they are looking for a venue where they can settle long term. For this long-term home, Drone Racing Zim is looking at either a sports club or an open space that is away from buildings (for obvious reasons).

How has the turnout for these races been so far?

We directed this one to Tawanda since we haven’t been to any of their events and only caught wind of their activities recently. He said:

The numbers have been good so far since it’s a new emerging sport worldwide and is largely unknown in Zimbabwe. There is a lot of keen interest and people want to fly drones for fun. We have about 40+ people in our community group now and the numbers are growing steadily.

The plan for this year is for Drone Racing Zim to host two events (at least).

Going forward Chihambakwe indicated that in order to grow they would have to continue hosting events and races as this is the only way to increase hype and get showcase how amazing the sport is. He also indicated that hosting these events is quite costly so they need sponsors and partners to help grow awareness along with the number of events.

He also said, “Securing a permanent or long-term venue is also key to growth, we need a large open place to fly and have our races.”

The last hurdle Drone Racing Zim have to contend with is regulation:

We are also going to work with CAAZ (Civil Aviation Authority of Zimbabwe) on legislation to help establish a framework for hobbyists drone pilots to be able to fly safely in a regulated way.

And one of our key goals is to get into primary schools,high schools and colleges to teach science students about drone technology so that they can come up with innovations and drive the future of this drone industry.

Hopefully, Drone Racing Zim continues to grow and all the drone racing enthusiasts out there reach out and become a part of this group.