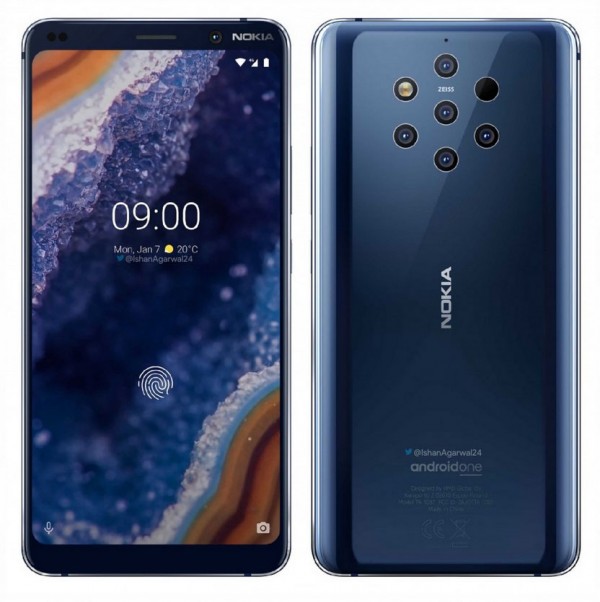 We have already started 2019 with a bang thanks to Samsung and it’s quartet of Galaxy S10s and the Galaxy Fold. But tomorrow is the official opening of the Mobile World Congress 2019 and we have a couple of heavyweights that you may need to look out for.

Nokia will be talking a lot about 5G at MWC but they will also be announcing the long awaited and heavily anticipated Nokia 9 Pureview. For those Nokia fanatics you will remember the first Pureview branded Nokia device was a photography masterclass. 41MP camera with a physical shutter and a xenon flash. It was smartphone camera king for almost 2 years.

The Nokia 9 Pureview is however rumored to have a penta (5) rear camera set up with Zeiss optics. Not much light has been shed on the types of lenses employed or the resolution of the individual cameras.

It’s also suggested that it will come with a Snapdragon 845 chipset, 6GB of RAM and 128GB of internal storage. It will be running Android 9.0 Pie under the Android One program. The battery is also suggested to be a 4150mAh unit and the display a notchless 1440×2960 QHD AMOLED unit with HDR10 support.

It is also rumored that Nokia will launch a variant of the Nokia 9 Pureview with a Snapdragon 855 chipset that will support 5G. More to come in their announcement tomorrow

Huawei will also be launching a couple of devices including next generation ultrabooks. The star of the show however is their answer to the Samsung Galaxy Fold. The Huawei Mate X, a 5G foldable smartphone. There is not much information about it apart from it having a foldable screen that folds outwards instead of the inwards format of the Samsung as well as it being 5G ready.

Lg will be also announcing the LG G8 with some bit of really interesting tech too. They plan on using the display of the phone as a speaker to enhance the smartphone’s audio. It is also rumored that it will be coming with gesture control. This means you will be able to operate the phone by just hovering your phone over the screen. We saw something of this sort with the Samsung Galaxy S3 and S4 back in the day. However no one really got to using it as it was not yet user friendly enough. Hopefully on the G8 it will be a bit less cumbersome given it will be using a TOF sensor instead.

These are the more high profile launches we expect to see tomorrow at MWC however there might be a couple more wild cards in the mix that we will be sure to fill you in on.