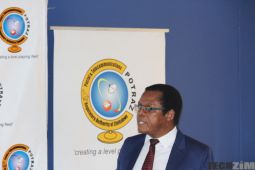 The Director-General of POTRAZ Dr Gift Machengete has become one of the many voices urging consumers to dismiss claims that 5G is the reason behind Coronavirus spread.

Machengete’s message dismisses 5G as a conspiracy theory and warns Zimbabweans planning on vandalizing network infrastructure that they will be jailed for a minimum of ten years.

As the global community escalates efforts to defend itself against the vicious and yet invisible enemy, coronavirus, it is deeply concerning and disheartening to note that misinformation and unfounded conspiracy theories are being spewed by some elements of our society into the public domain, through among other channels – the Internet, causing confusion, anxiety and harm to the global community and its infrastructures.

One of such conspiracy theories is linking the Fifth Generation cellular mobile technologies (5G) to the spread of COVID-19. Resultantly, in a number of countries, 5G and communications infrastructure, in general, have been subjected to acts of vandalism, arson and various acts of sabotage as citizens seek to “free the themselves” from a technology they believe is the underlying cause for the deadly pandemic We strongly remind members of the public that under Zimbabwean law, network vandalism or intentional damage to critical information infrastructure is a criminal offence which, upon conviction, carries a minimum of ten years in jail

POTRAZ, as a science-based statutory body with responsibility over the safe and orderly rollout of telecommunication networks in Zimbabwe, would like to make it clear to the citizenry and public at large, that the purported link between 5G and COVID-19 is a falsehood, which has no scientific basis nor real evidence backing it. Even outside the scientific realm, evidence abounds that many countries, Zimbabwe included, which are yet to rollout 5G are heavily afflicted by the pandemic, while some countries with 5G have very few. if any confirmed cases.

For the avoidance of doubt, however, we wish to stress that Zimbabwe does not have 5G deployments and yet it is a well-known fact that COVID-19 is in our midst, and the number of cases is increasing by the day

POTRAZ takes this opportunity to assure all Zimbabweans and the public in general that only standardised network equipment is allowed for deployment in Zimbabwe. As a minimum, all mobile networks in Zimbabwe are designed and equipped to meet International Telecommunication Union (ITU) standards, broadly known as International Mobile Telecommunication (IMT) standards. IMT standards, 5G/IMT 2020 included, are designed with utmost human consideration regarding safety and environmental protection. The equipment, and therefore networks, operate within electromagnetic fields (EMF) exposure limits set out in guidelines developed by the following renowned International Institutions:

The EMF guidelines produced by the two international organizations, both of which are formally recognised by the World Health Organization (WHO), are developed through a peer-review-based scientific process involving engineering, medical and other eminent experts.

Through the process, biological effects including thermal and non-thermal effects of EMF exposure for various power density levels are determined and the respective protection limits are set with an agreed safety margin. For purposes of enforcing conformance to set standards, network equipment is subjected to either type-approval or type-acceptance, as deemed appropriate by the National Regulatory Authority (NRA).

Domestically, after wide stakeholder consultations and a workshop which was graced by International EMF experts from WHO and GSMA, Zimbabwe came up with Statutory Instrument 130 of 2017 (Postal and Telecommunications Human Exposure to Non-ionising Electromagnetic Field Radiation Regulations, 2017) which prescribes the exposure limits for the frequency range 100 kHz – 300 GHz. These regulations are modelled on WHO Model Legislation and Regulations,

There are a few basic facts to note about electromagnetic fields:

ACCORDINGLY, WE WISH TO CATEGORICALLY ASSURE CITIZENS THAT: