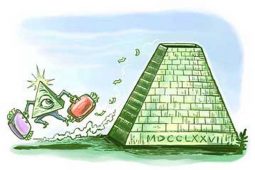 Tough times are indeed a rich ground for scammers… Reportedly 10,000 Zimbabweans lost an estimated US$30 million to Ponzi Schemes this year.

“At least 10,000 complainants reportedly lost over US$30 million between them. We have handled some 892 such cases involving thousands of complainants. The scammers quickly disappear after swindling the unsuspecting investors. Millions of dollars were lost, some lost houses while others committed suicide upon discovering they would have been duped. We have handled suicide cases related to Ponzi schemes”

According to the Zimbabwe Republic Police (ZRP) the following shady enterprises were responsible for the loss of over 30 million United States dollars:

How you can protect yourself and loved ones from Ponzi Schemes

These schemes and organisations are not identical but there are similarities in how they operate that can make them easier to spot.

The first and easiest one is high returns for little to no risk. The people behind these schemes are keenly aware of the dire straits that Zimbabweans are enduring and they spin a very convincing yarn. They will sell you dreams of making double or even triple the amount you invested in a very short space of time.

In most cases, they will ask you to recruit other people which is the second red flag. Any organisation that tells you that it will pay you to get people on board should immediately raise your suspicion. Now, to be fair there are legitimate referral programs out there but one thing common with Ponzi schemes is that they will talk of “credits or vouchers” that will be added to your wallet when you get more people on board but never actual cash payouts.

The third red flag is that the organisation does not have a digital or physical presence (beyond WhatsApp groups). This should raise alarm because investment and credit firms have to be registered by one or more regulators. Research is vital if you are thinking of investing. You should contact the Reserve Bank of Zimbabwe (RBZ) and ask about the company or request the contact details of the authority that is associated with that area.

Fourthly, a hallmark of shady schemes is that getting your money out is near impossible. These enterprises make a concerted effort to ensure that the money you put in never leaves. When enough people start asking for their money back, this is when the scammers disappear and start the scheme again under another name.

Lastly, you need to be aware of is the pressure to reinvest or act now. They will sell dreams and put pressure on you to put your money in as an initial investment or an additional one. You will be shown impressive performance figures that will most certainly be false because markets fluctuate and there has rarely ever been a perpetual boom in any industry. Things go up and down regularly because of market forces as well as other events that affect that sector/industry.

4 thoughts on “US$30 million lost to Ponzi schemes this year, here’s how you can spot these scammers”