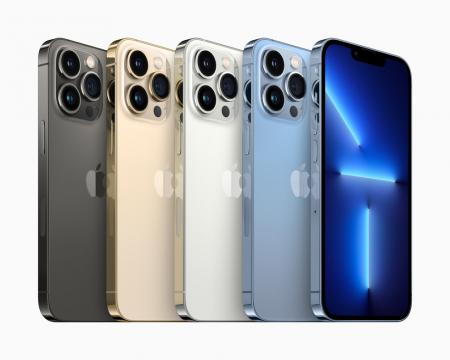 The phone has a 6.5 inch HD+ display, 5000mAh battery, Mediatek Helio P35 processor and tops out at 6GB RAM and 128GB storage, although there is an SD card slot if that’s not enough. It launched with Android 10 and will be getting its final update to Android 12 soon.

This budget smartphone recorded 50.8 million shipments last year, enough to gift each Zimbabwean 3 handsets. That’s a high figure. Remember though, shipped does not equal sold. Hence why the A12 may have won the shipment battle but only managed to be the 6th best selling smartphone.

That is no small feat as there were over 2400 active smartphone models in the market in 2021. However, it is still fascinating to see Samsung’s budget smartphones rise in significance. The best selling Android phone of all time is the Samsung Galaxy S4 which sold over 80 million units.

The 2013 S4 was a flagship smartphone with a flagship price tag for the time. That makes the 80 million all the more impressive. In 2021, none of the Samsung flagships cracked the top 10, despite the Flip Z seeing stellar popularity in certain markets. The over $1000 flagships could not compete with the sub-$200 A12. Today, you can get the A12 for as low as $149 on Amazon.

I think that has to do with the fact that as technology has improved, even budget phones are good enough for most tasks. Like that famous YouTuber says, ‘good phones are getting cheap and cheap phones are getting good.’ Some of those who would have sprung for an S device were perfectly happy with an A12 in 2021.

Of course, this is not ideal for Samsung as there is less markup on budget phones. So, in Sammy’s ideal world all those A12 customers would buy Z Folds instead. Therefore we find that Samsung did not improve their low and mid end smartphones for the heck of it. Competition from Chinese brands that pack flagships features in low end priced phones had to be countered.

Hence why we see Xiaomi with 2 entries in the top 10 best selling smartphones of 2021. Xiaomi in particular has benefitted from Huawei’s downfall to become the second biggest Android manufacturer after Samsung. Often beating Samsung in some quarters too. Xiaomi, OPPO, Redmi, Vivo and other Chinese brands and sub-brands are giving Samsung a run for its money globally.

In Africa, where the low to mid end smartphones are king, Samsung faces stiff competition from yet another Chinese phone maker – Transsion. Although the Samsung logo was on more phones sold on the continent than any other brand, when we combine the sales from Tecno, itel and Infinix, all Transsion brands, we find Sammy relegated to second position.

Back to the global top 10 – Apple dominance

That A12 and two Xiaomis were the only Androids in the top 10 as reported by Counterpoint Research. The remaining 7 were all iPhones. The iPhone 12 was the best selling smartphone of 2021, with a 2.9% share of total smartphone sales. The iPhone 13 was only released in September 2021 and yet sold quickly enough to be the 3rd best selling phone in the world. 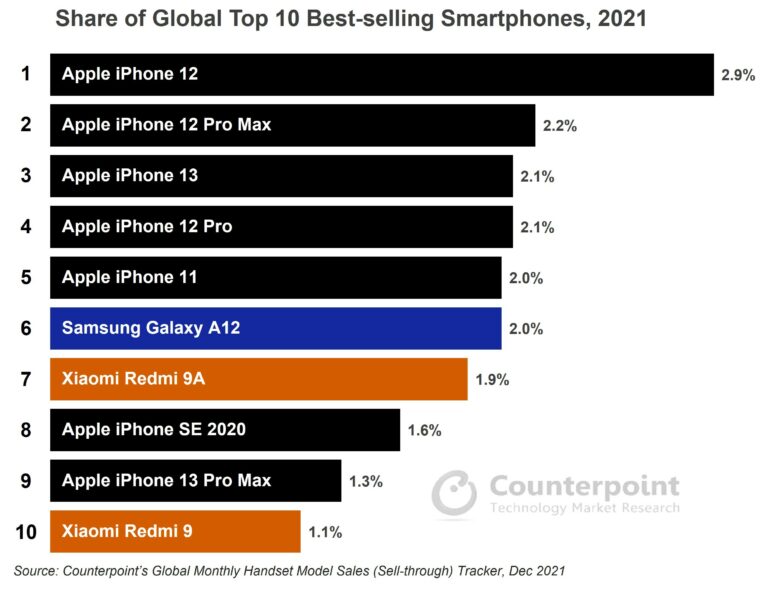 Apple has a few models on sale and so it makes sense that individual models would have high sales figures. Samsung and the other Android manufacturers release many many more models and so with sales split among more models, they are unlikely to top the list above.

This is borne out by the fact that Samsung shipped almost 40 million more smartphones than Apple but only has one entry in the top ten individual model sales compared to Apple’s 7.

We talked about the impressive 80 million units that the Galaxy S4 pushed. That’s peanuts when compared to the best selling smartphone ever, the iPhone 6 and 6Plus. That duo sold 220 million units, enough to give every Zimbabwean 14 devices of their own.

Those Apple sales figures are even more shocking when you consider that the average iPhone price is much higher than the competition’s.

The cheapest iPhone on the list above is the SE 2020 which launched at $400, enough to get two A12’s. That right there is the impressive bit – Apple does not have a budget phone and yet commands 7 spots on the top 10 best selling.

That means Apple will be taking home the majority of smartphone profits for the foreseeable future. In 2021, Apple had 44% of smartphone market share by revenue, with Samsung a distant second with 16% share of revenue.

Africa is moving on from Samsung and Apple

The Apple-Samsung debate is no longer as fierce in Africa. While I won’t pretend phones from these two juggernauts are not desirable, it remains that we have more options today than ever before. Even with Huawei’s struggles and LG’s exit.

We went in depth into the undisputed king in Africa, Transsion, with its Tecno, itel and Infinix brands. That to me, is where Africa’s eyes should be.

9 thoughts on “Samsung Galaxy A12 was the best selling Android smartphone of 2021, but iPhone dominated”