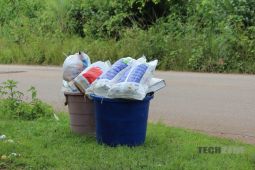 A team at the University of Texas at Austin used artificial intelligence (AI) to create an enzyme that eats plastic much much faster than it would degrade naturally.

To say AI may be vague. Let me explain.

We use a lot of plastic, like a lot. Around the world we produce around 400 million tons of plastic every year. Now when we consider that this plastic can then take centuries to decompose, the problem becomes apparent.

Many researchers are working on ways to speed up the plastic decomposition process. Some identified enzymes as a possible solution to chemically break down plastics. I know, who remembers Bio class? Enzymes are proteins that accelerate chemical reactions in living beings.

Inspiration for the UT crew came from some bacteria that naturally produces an enzyme that breaks down plastic. They weren’t the first to look at the PETase enzyme which eats plastic.

As the name suggests PETase breaks down PET (polyethylene terephthalate) like the one used to bottle water and fizzy drinks. This kind of plastic accounts for 12% of global solid waste.

However, researchers have been unsuccessful in trying to increase the enzyme’s effectiveness period above 24 hours, until now.

AI to the rescue

The UT team used a machine learning algorithm to engineer a robust and active PETase. The algorithm determined which mutations of the PETase enzyme would make it work faster and at lower temperatures. Easier said than done.

They then combined five mutations to create FAST-PETase which is indeed the best we have seen so far. They demonstrated that it is better than the natural PETase and other engineered variants between 30 and 50 °C and a range of pH levels.

The team then tested it on 51 different used plastic containers and turns out, it can almost completely degraded by plastics in 1 week. Some containers were broken down in as little as a day. Imagine that. That would take centuries if left to natural processes.

This should revolutionise plastic recycling and we have machine learning (and those that wrote the algorithms) to thank.

Has artificial intelligence (AI) come alive like in sci-fi movies? This Google engineer thinks so