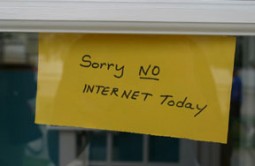 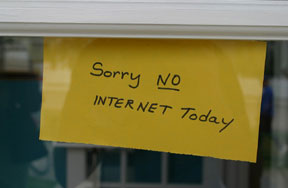 PowerTel and Econet, Zimbabwe’s main suppliers of international internet bandwidth both experienced some downtime on their fibre cables yesterday.

The PowerTel the outage started on Sunday, 6 February at about 1645hrs and lasted until yesterday night at 2235hrs. PowerTel says the cause of the outage was cut on the Botswana Telecommunications Corporation fibre cable in Botswana caused by a road construction company. BTC supplies PowerTel a 155mbs bandwidth pipe.

PowerTel’s CDMA mobile broadband service was affected by the downtime and PowerTel says it was restored today at midday.

It’s not clear when the Liquid Telecom (Econet’s fibre subsidiary) went down or when it was restored but Zim ISPs using the service notified customers yesterday through email that they were not sure when both cables would be restored. See this email below from Yo Africa – one of Zimbabwe’s largest ISP – to customers sent at about 4PM on 7 February 2011:

Our main international fibre connections via our upstream providers PowerTel and Liquid Telecom have both developed faults over the last 12 hours. These 2 fibre links feed a large portion of the international and regional Internet bandwidth into Zimbabwe. This affects all Service Providers utilising these links. We do not at this time have details of the exact nature of the faults and the time to resolution.

In the past, the PowerTel fibre cable going down meant most of Zimbabwe’s internet would slow down significantly as PowerTel was the only supplier of high speed fibre internet into the country. Lately, Liquid Telecom has been connecting some ISPs notably ZOL, and (as we’ve just learnt, Yo Africa) to its Fibre cable connected to Seacom.

We asked PowerTel what the operator is doing to prevent such outages in future seeing they have occurred a number of times recently and PowerTel Sales and Marketing Manager, Willard Nyagwande had this to say: “[We] Just [want] to tell our customers that we are left with at most 45km to get into Mozambique..That will provide the much needed redundancy/back up”