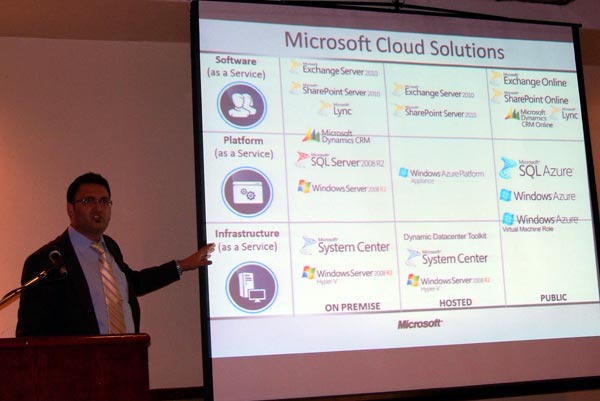 On Thursday last week IT professionals and Microsoft partners gathered at Rainbow Towers hotel to attend Microsoft’s first Open Door event in the country. The event was held by Microsoft to showcase their latest technologies especially those enabling companies locally to implement cloud computing.

For the early part of the morning, presentations focused on the availability of Microsoft products that can make cloud computing a reality to local companies without the heavy costs of acquiring more software if they already use Microsoft technologies to power their IT infrastructure. IT professionals, the Microsoft team said, can start implementing private clouds at their premises right away if they already have the required software. The presentations also touched on social networking and mobile devices and how these are blurring the line between enterprise and consumer computing experiences.

Later in the morning, a very interactive session (in terms of feedback from the attendees) was held on Microsoft licensing. After presenting on the various licensing options for the Microsoft products, a number of attendees questioned why users of software in a country like Zimbabwe are charged the same price for software as use in North America and Europe yet because of limitations in infrastructure, Zimbabwean (African in general) users cannot use some features of the software. This, and that Microsoft software is expensive, some attendees said, was the reason software piracy is rampant locally.

In Microsoft’s defense, the representatives explained that countries in Africa actually enjoy a lower price than other continents and that users have the option to buy basic software instead of feature rich versions (the “Ultimate” ones).

The day ended with a live demonstration of the some of the latest Microsoft business software like Microsoft Lync 2010, Exchange 2010 and Office 2010.