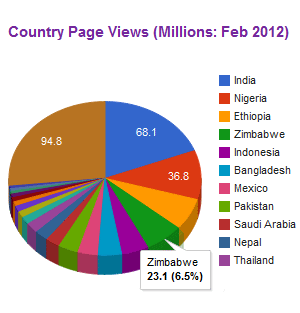 We got pointed a few days ago to some biNu usage statistics that have been released by mobile platform Australian startup. The stats show the top 10 countries by usage on biNu as well as the top 10 apps in those countries.

The startup’s user base continues to grow rapidly. From just 300 thousand monthly unique users last year, biNu has grown to an estimated 3.7 million monthly unique users in March 2012. Page view wise growth has been nothing short of impressive too; in September last year when we last wrote about their growth, biNu was getting about 150 million page views a month globally. Compare that to the March 2012’s estimate of 443 million page views. A threefold increase!

biNu’s top country remains India which registered some 68.1 million page views last month. It’s followed by Nigeria, Ethiopia and Zimbabwe and Indonesia in that order with 36.8M, 23.9M, 23.1M and 16.3M page views respectively. Egypt, which used to be one of the top biNu using countries last year, is nowhere in the top 10 now.

On the apps front, no prizes for guess what the top biNu app is. It’s Facebook. Followed by Google Search. Other top 10 apps include biNu Messenger, Google Translate, News, YouTube and Twitter.

In Zimbabwe, the top 5 apps are Facebook, Facebook messenger, News, biNu Messenger and Google Search in that order.

It’s hard to explain the slow down, so we’ll have biNu tell us this one. But before they do that, a little speculation: It may partly be a result of the rapid adoption of WhatsApp as a means to communicate short messages. It may also be that low cost Android mobile phones are starting to eat into the market once dominated by cheap Asian imports sold in the country mainly by G-Tide (renamed G-Telecoms). Remember the two companies had a deal to have a white label biNu on every G-Tide sold.

You can view the full stats here: binu.com/usage-statistics