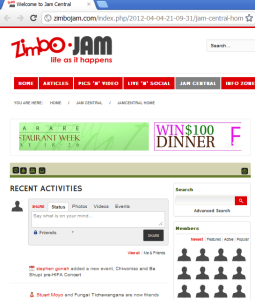 Zimbabwe’s most trafficked entertainment and lifestyle news website, Zimbo Jam, is finally back. The site went down on 13 April as the team there upgraded it to a new version. During the upgrade however, things didn’t go as planned; a major component failed, derailing the whole upgrade process.

Today, day 11 since the mishap, the new Zimbo Jam came online and it’s spotting a really different look. Our first impressions (which this writer already posted on Twitter earlier) are that the new site has some features we really love, especially the JamPlay which allows you to play some local Zimbo songs while you surf around and read stuff. The looks though look quite plain.

Another central feature, one that will be interesting to watch is a social network inside Zimbo Jam. It’s called Jam Central and it’s powered by the same software running the SHA Zim social network. The same running Eatout’s new Foodbook. JomSocial. 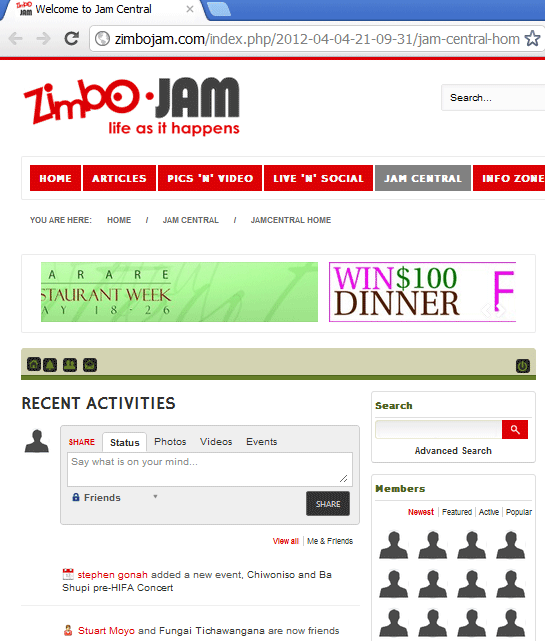 The social aspects are not a big surprise; the Zimbo Jam founder did indicate last week that they mean to move as many of the live updates they do from Facebook and Twitter to the Zimbo Jam website. We’re not sure if the word “move” means literally moving from these social networks or they just meant having updates on Zimbo Jam in addition to Facebook and Twitter. We suspect the later. The former would be an interesting strategy.

One observant Tweeter noted this morning that the new Zimbo Jams design more than resembles the HMetro Website.

What do you think about the new Zimbo Jam? Which one do you prefer, the new or the old?