Winners of the AMH Hackathon announced 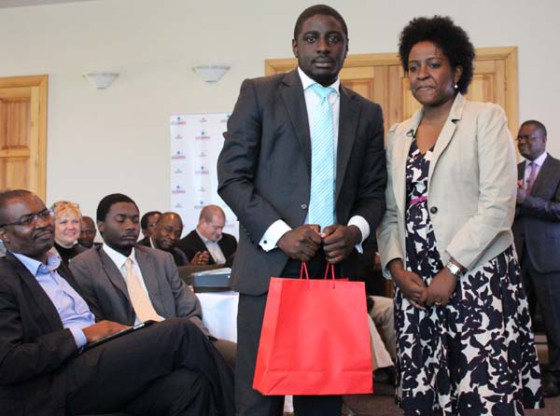 We’re just from the AMH conversations breakfast event where Google Africa Policy Manager, presented on how seriously they take innovation at Google and the things that company is doing on the continent and world over. Great initiative by Alpha Media. More on that in another post today. This post is for announcing the winners of the AMH Hackathon that took place yesterday. We posted some pictures earlier, check them out.

There were a total of 16 entries of individuals and teams in the hackathon and of those the following 3 guys and a special mention, came tops.

The prize went to Prince Kaguda, who came up with an application that delivers news via SMS and USSD and with an option for free subscription that is powered by adverts. The second spot went to Shaun Benjamin. Shaun developed a prototype for an application that integrates the 3 concept options provided by Alpha which were; news crowdsourcing, news dissemination, and commodity prices compilation. Third place went to Tonderai Shamuyarira, who came up with an app for crowdsourcing news in the form of text or images with options for the sources of the submissions to remain anonymous.

The winners took home a Samsung Galaxy tab each a Nokia smartphone phone and other tech accessories.

Commenting on the hackathon, Kaguda said “We need more events like these to give an opportunity to the abundance of young talent that in Zimbabwe. It’s untapped.” In terms of his plans with the application going forward, Kaguda says his team will redesign the application as this was only a prototype worked on in a single day. “We’re going to incorporate the feedback we got form the judges and with the assistance of the Alpha and Telecel, launch the news application.”

Special mention went to Hayden James who developed an for commodity prices at local farmer markets like Mbare Msika. The application allows farmers to compare prices before they commit to coming to market with the produce.