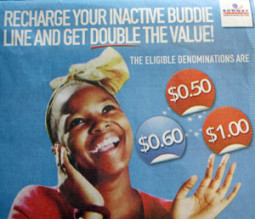 Today, Econet announced the launch of a promo where subscribers are credited with bonus free  for recharging their prepaid subscriptions. This basically to encourage people that haven’t been using their lines for various reason (like migrating to the other 2 mobile networks) to be active. We’d be jumping with excitement if it weren’t for one thing. We just had to compare with the competition.

Here’s the part of what the Econet ad says:

Reactivate your Buddie line and get 100% bonus of recharge amount to use anytime on all Econet to Econet calls! The eligible denominations are $0.50, $0.60 and $1.00. EcoCash recharges apply.

Exactly a month ago Telecel launched their version buying subscribers back, and here’s a quote from their release then:

The promotion, which was launched today (Friday) is giving a $10 welcome bonus to subscribers who reactivate their dormant lines and an additional $10 bonus for on-net calls immediately after they have recharged and used up 20 cents through the reactivated line.

It doesn’t make sense why Econet would use the same promo but with significantly reduced rewards to attract back customers. Either Telecel is being unwise bleeding a lot of money through these promos and will watch as their average revenue per user (ARPU) plummets, or it’s Econet that’s being unwise to think this will help their ARPU.

But promos are promos, we’re not complaining!