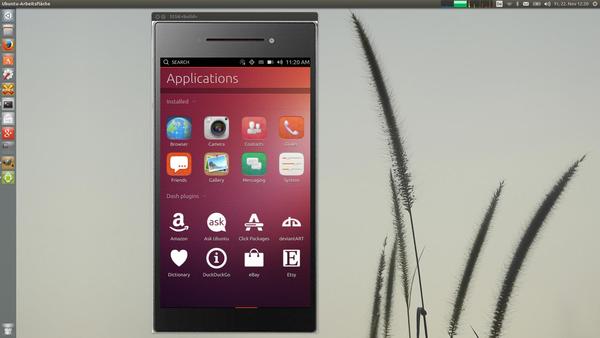 A while ago a reader asked for a podcast review of the the current crop of Ubuntu Touch Apps. I have been meaning to but my tight schedule and agoraphobia has thus far prevented me. That and the fact that I do not currently own a Nexus device on which to install and test the images. Currently none of my Chinese devices are supported and I hope this situation will be rectified someday soon.

In the meantime Canonical, the folks behind Ubuntu, have managed to create the next best thing to keep the curious amongst us occupied whilst we wait for either devices to ship with a pre-installed version of Ubuntu Touch or compatible images to install on our Android devices. During the weekend an X86 emulator of the Ubuntu Touch operating system was released. The emulator creates  a virtual phone on your desktop and allows you test and run Ubuntu Touch Apps on your desktop. This will allow you to get a feel of what the Operating system feels like and if you so wish, develop and test apps. Most importantly the curious among us will get to satisfy our curiosity.

The emulator can be easily installed  and run using the following commands:

The knowledgeable among you know that most mobile devices run on the ARM architecture so it is no surprise that Ubuntu Touch images were also made with this architecture in mind. As a result the image may not run as well on your desktop which in all probability is either Intel or AMD based. Also some Apps not work or crash unexpectedly especially if were designed for the ARM architecture.

If running the the ubuntu-emulator create command does not work you should try opening an elevated terminal session using the following commands:

and run the command within it. I am assuming you have Unity/Gnome installed. If not, just replace the gnome-terminal command with the command you use to launch your terminal. For example lx-terminal in Lubuntu.

Please leave a comment and let us know what you like and hate about the Ubuntu Touch OS.

One thought on “Wetting your feet with Ubuntu Touch”