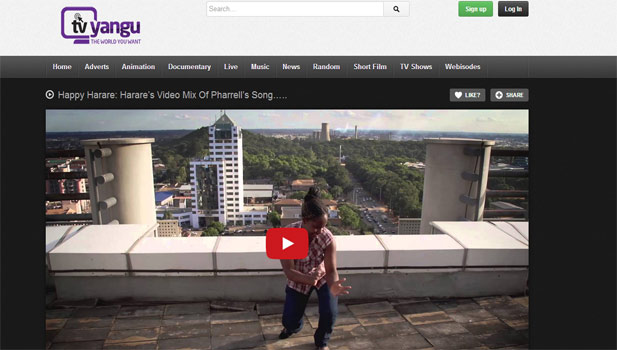 We all love great video content. It has an even greater impact if it’s got local relevance. Because of this appetite more and more local content creators are churning out productions but they face the challenge of limited online places where all this content can be consumed.

TV Yangu, a local video on demand service is one startup that has set out to solve this problem.The brain child of Munyaradzi Dodo (Munya Bloggo) & Wilhelm Olivier, TV Yangu was launched online in November 2013 with the current format of the site released in June 2014.

According to Munya Bloggo the VOD site was inspired by the inaccurate depiction of Zimbabwe and Africa that is predominant in various forms of media.This is something that should be clarified by local content that gives a true picture of what is happening in Zimbabwe.

Bloggo was a television producer at Celebration Ministries frustrated by how videos and film projects that he had been involved in had limited views despite the huge investment made to make these projects a reality. He realised that there were limited places to go and discover new Zimbabwean content.

After Bloggo attended the National Association of Broadcasters in 2010 in the USA he was exposed to some of the latest trends in broadcasting technology. This triggered an obsession with finding low cost solutions for content creators and consumers.

He was finally spurred into moulding this passion into a startup venture in 2013 during the Media Diversity Week. Through the inspirational stories of Afrinolly, Bloggo and Olivier jump-started the project that has since come to be the TV Yangu we know right now.

Bloggo says that the millions of Zimbabweans scattered across the globe who are very nostalgic about home want to see home from wherever they are instead of just reading about it. It’s difficult to discover African videos online unless you know the names of artists and films and specifically search for them online.

With the thousands of hours of video uploaded onto YouTube daily there are slim chances that a Zimbabwean or African video gets seen by the desired audience. Local and regional video content (other than music videos which are highly popular) is largely obscure on the internet.

TV Yangu helps local and diasporan viewers to discover fresh content from home online, while enabling both audiences to discover African diasporan content. This same content that is also informative and entertaining with an African footprint tends to be neglected on ZBC, DStv, Sky or Netflix.

The two founders of TV Yangu have been bootstrapping their startup journey with income from other productions and revenue streams sustaining the website and its associated projects.

TV Yangu has a hybrid business model based on a vision and need to curate video content. The TV Yangu team has started to test out advertising, sponsored videos and promoted videos.Despite the fledgling state of TV Yangu they face a lot of competition in the market in the form of providers like Netflix, iROKO, Buni, Pana, Afrinolly, iBaka and Wabona.

Bloggo says TV Yangu has been in “stealth mode” but has experienced phenomenal growth through word of mouth, social media, networking and targeted SEO. Their plan is to grow the ecosystem organically and for the content and traffic to be shaped by TEAMYANGU – A network of curators & creators around the world and the audience who consume the content.

The organic approach will ensure that as content increases, traffic increases and remains faithful to their mission statement “The World You Want”.

AT the present moment the TV Yangu team is excited to have managed to strike up a content sharing agreement with MTV Networks for a production called The Shuga Naija series. Bloggo says the series has amazing content which should challenge local producers to up their game.

Another production they are showing is the talk show Makosi Today which is now in its second season. The show, hosted by Makosi Musambasi, has gained a lot of popularity online that has seen it being picked up by ZBC, VOX Africa (DStv & Sky) and starts airing in September on VOX.

Other efforts have been the collection of regional and local short and full length feature films that are not available online on a platform called CINEMA YANGU. Viewers keen on the films will subscribe to access the content which should give content creators a revenue stream through the platform.

TV Yangu is working with different production houses to make sure that Zimbabwean content is visible and relevant online. They are open to new idea partnerships. Though they are not developers or coders (they are producers who value the power of the Internet) they are keen to partner with other startups.