Sometime last year we wrote about the M-Ledger Android application that had been launched by Safaricom as an “accounting service” for the mobile money service M-Pesa. It was the product of a Kenyan startup that was working with the leading Kenyan mobile network.

Noticing the relevance of such a service for Zimbabweans who use mobile money more than conventional banking channels, a local developer, Gedion Moyo, (he’s the same guy behind the first EcoCash mobile app that was later blocked by Econet) has come up with his own version of a mobile money ledger service.

Called MobiLedger, the Android app which is still in beta, has been placed in the Google Play Store and the apk has also been made available for download from this link.  It currently works for EcoCash only, but Moyo says he will be rolling out support for Telecash shortly.

What does the app do exactly?

MobiLedger acts as a mini accounting system for your mobile money account. It keeps track of all your transactions, records the financial history and categorises the different uses of the money in your wallet for a specific period. What you’d have had to thumb through and often reconcile on your own is then presented clearly.

The interface has 3 tabs, Overview, History and Distribution. Overview displays your current mobile money balance as well as a graphical breakdown of the amounts you have spent on the different mobile money services. History offers a track of five months worth of transactions and the Distribution tab displays the related amounts on each service. 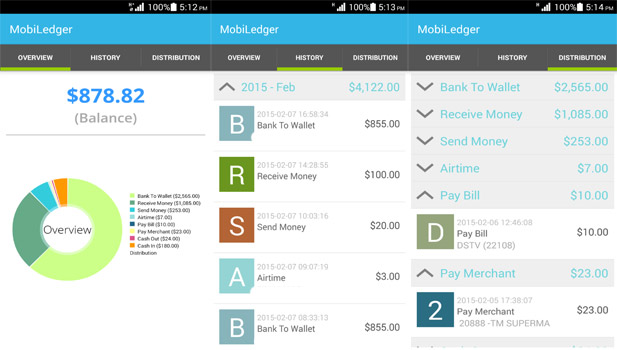 Having only had the MobiLedger app for a brief moment I am impressed by the User Interface and functionality presented by the beta version so far. It genuinely makes the monitoring of mobile money movement easier.

For once I don’t have to access my USSD menu or the existing EcoCash app and its prompts to check on my wallet balance or draw up figures for when I sent or received any money or made that DStv payment.

This however felt a bit weird because the price for all this convenience was giving the app unprecedented access to my financial records. It had “privacy violation” sprayed all over it.

If you have embraced mobile money as an alternative to conventional banking transactions, this app will show a very clear paper trail, the sort of information that you wouldn’t want anyone who picks up your phone to go through without any security prompt.

Besides the value this app provides to any mobile money agents who decide to use it, MobiLedger ought to be an asset for traders and informal business people that have turned to their wallets as the main channel for moving money. This, as it turns out, is now a huge market.

The informal market, according to government’s estimates for last year, was handling as much as $7.6 billion of the funds in this country. There’s also the fact that in a survey conducted by the Central bank and Zimbabwean Economic Policy Analysis and Research Unit (ZEPARU), only 24% of small to medium-sized enterprises had opened bank accounts.

The SME transactions are being conducted on mobile money instead. This is something that ought to be considered in further iterations of the app. The value of information and detail should be assigned to these enterprises that rely on mobile money extensively.

These are the same considerations that seem to have been key  for the M-Ledger App team when they were working on the solution for M-Pesa. The M-Ledger app has more detail on transactions, agents involved as well as spreads on account activity. These aspects could be added for later versions.

MobiLedger is a great tool for business reconciliation on an entrepreneurship level, and if used correctly it adds weight to the financial literacy objective of mobile money as a financial service tool.

These elements are actually critical for the core market of mobile money services that conduct all transactions in the absence of traditional accounting procedure. Throwing in a financial record helps display where the money is going and hopefully dictate how to plan for where it should be spent next and more importantly, how it should be saved.

Will this app be snapped up by the Mobile Networks?

It’s hard to say whether EcoCash or Telecash would be keen on ploughing money into an existing app. We do not have Silicon Valley acquisitions in these here parts, no matter how relevant a service might appear to be.

What will likely occur is a re-creation of the same service from these mobile networks. It has happened before and now that Econet, as an example, has a core team of development talent, apps like this are hardly as difficult to come up with as they used to be a while ago.

What are your thoughts on this app? What do you think needs to be added to give it a better feel?