Econet’s case against The Source escalates as publication is raided 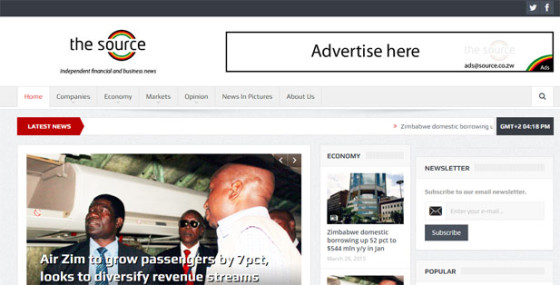 The Newsday has just reported that The Source, an online Zimbabwean business publication is being raided by the Deputy Sheriff’s department. The officers are looking for a set of documents and laptops belonging to Bernard Mpofu, one of the Source’s journalists.

This comes as a follow-up to a High Court order granted to local mobile network operator Econet Wireless and its subsidiary Steward Bank to have the publication withdraw some of its published content.

One story published by The Source alleged that Steward Bank was involved in a land swap agreement to recover $2.1 million loaned to local businessman Phillip Chiyangwa. The Source claimed to have confidential documents to support this.

A second story states that the Government had borrowed $30 million from Econet Wireless in a deal brokered by Econet Chairman Steward Bank’s founder Tawanda Nyambirai and facilitated through the bank.

Econet and Steward have sought to have the documents surrendered. The Source on the other hand, has been contesting the actions being taken by Econet and Steward Bank, citing a threat to the freedom of expression.

Is this a backlash for irresponsible journalism from the Source or press freedom being quashed by a corporate heavyweight?

This is a developing story. We will share more information on this story as details emerge.