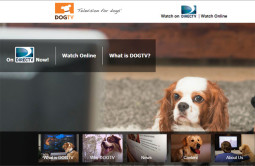 Just when I thought I’d heard every sort of idea for content creation and what is worth the effort, I just found out about a channel for dogs called, aptly, DogTV.

Yes, a channel that shows content for dogs. Someone came up with the idea of a channel that flights content that dogs watch, sometimes with their owners. It works as a way to keep them from being bored or stressed.

According to an article in The Guardian on the origins of DogTV, this idea was backed by research that helped determine the type of content that would work. Ron Levi, the guy behind the concept found out that pets, specifically dogs, respond positively to TV content and more than half of Americans already left their TVs on for their pets as an entertainment/calming option.

After years of research and sample tests with 2 hours of content which was tried in two different cities in the US, the project took off and has reached its current stage.

The channel was launched in Israel in 2009 and since then has managed to attract a lot of views and paid subscriptions from dog owners that appreciate the effectiveness of the content.

DogTV also has a strong presence online with a dedicated YouTube channel and as anyone would guess, it has a very visible footprint on other social media platforms. It has distribution deals in 9 countries and paid subscribers from 35 countries. It has an online streaming service accessible from iOS, Android, Mac and PC and is also accessible on Roku and Samsung and LG smart TVs.

It looks like one of the biggest takeaways from the DogTV success is that as long as you are sure about your product/content, who will enjoy it and  who will pay for it, you can come up with something that will be scalable. The internet can do a lot to help do that for any content creator already, even if the target audience is canine.

One thought on “DogTV, a channel for dogs, proves that there’s no limit to content creativity”