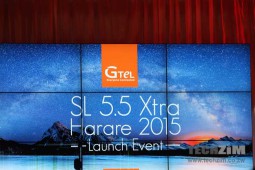 You’re probably reading this from a smart phone, and you’ve seen what phones can and can’t do by now. This is, after all, 2015, and capturing your attention when it comes to smartphone tech is hardly an easy task anymore.

That’s something GTeL, Zimbabwe’s most visible phone brand (to be fair the market isn’t littered with a lot of players doing this) has figured out. Which probably explains the effort behind the razzle-dazzle affair that accompanies their product launches.

Tonight, we experienced the same GTeL glitz at the launch of its new flagship phone, the SL5.5 Xtra. If you’ve been following GTeL devices the name ought to be very familiar. That’s because it’s an improvement from the SL5.5 that was launched 8 months ago at another classy event.

This time, GTeL unveiled a device that not only improves on the shortcomings of the previous SL5.5 (apparently this previous version was prone to overheating, not as robust from a hardware standpoint etc) but is meant to bring GteL up to speed with what the best in mobile phones are dishing out this season.

GTeL’s CEO, Chamunorwa Shumba, made an engaging presentation that sold the SL5.5 Xtra’s strengths and gave a run through the phone’s impressive specs.

The SL5.5 Xtra comes with a 5.2 inch SUPER AMOLED screen with a 1.7GHZ Octacore processor.  It’s got a 13 Megapixel rear camera and an 8 megapixel snapper on the front. It also boasts an impressive 2750 mAH battery, something that GTeL says it displays with an extended battery life. GTeL has also held on to its passion for the super slim devices.

Interestingly, this is a dual SIM LTE phone, something that you won’t see on other 4G ready LTE devices. It’s almost as if GTeL is also betting on the rise of the network tech, while trying to accommodate our market’s appetite for Dual SIM ownership.

The asking price was put at $495, something that undercuts the iPhone 6 and Samsung Galaxy S6 Edge, the 2 devices that Shumba and the GteL team are keen on measuring their own flagship against.

GTeL has maintained its relationship with the mobile operator Telecel, and you can still pick this phone up on the 12 month credit plan dubbed Khuluma. This dance with Telecel means that this phone comes with WhatsApp bundles, 150 free voice minutes, 120 SMSes, 20MB data as well as Telecare funeral and accident cover every month for a full year.

The jury is still out on what this phone does or whether it will live up to the fanfare that accompanied its launch tonight. I’ll wait for an extensive review on all these specs before placing it up there with other leading phones. It’s only fair because specs don’t always tell the whole story.

But on first impressions, it looks like GTeL have a decent device which is a great way to buy into a world that has been displayed by the leading devices in mobile tech.

GTeL seems to have mastered the local market dynamics, seeing that Shumba stated that they have sold 900,000 smartphones to date. That’s a lot of devices and says a lot about their marketing strategy, so I’m sure they know who to push this device to.

I guess all that razzle-dazzle is working after all.