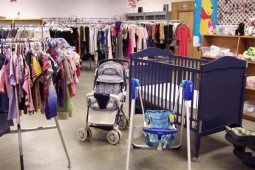 When I was a kid predicting the sex of a baby before birth was unheard of. One could only guess and there were a lot of myths on the issue. To be honest I cannot remember what it was. If the pregnant mother was extremely fond of girls it would mean she was going to give birth to a boy, or was it the other way round?

The unintended result was, however, that when the baby’s “future” (clothes) were purchased a decision had to be made whether to buy boy or girl clothes. My mother likes to remind me, much to my chagrin, that I spent the first week or so of my life in cute pink girl clothes.

Nowadays thanks to technology (and the prophets) in return for less than $50, couples can know well in advance the sex of the baby they are expecting and avoid the mishap of turning their newborn into a cross dresser as the unexpected happens.

Gone are the days when we had to wait for some guy to bring us the disc from across the ocean or from Mzansi. With the increase in broadband speed most people can easily upgrade their PCs. Well for most people it will mean leaving your PC upgrading throughout the night but I still remember days when 56 kbps was all you could do.

The good news is that for most people the upgrade will be free! This applies if you are one of the sensible people who ditched XP, (I know there are still a lot of you out there still hung on the old Redmond sweetheart) but if you are running genuine copies of Windows 8.1, 8 and Windows 7 you will have an entire year to upgrade for free.

What this means is that if you upgrade to Windows 10 between 29 July 2015 and 29 July 2016 from any of these previous releases of Windows, you will get a free lifetime Windows 10 licence on that device.

Those running cracked versions of Windows will not however be benefiting from this free upgrade as their licences will most likely be invalidated. Given how most laptops come with free Windows 7 licences it is mind boggling to understand why people continue to run pirated copies of Windows.

It puts you at serious risk especially as more and more Zimbabweans get into online shopping. You do not want some Russian guy cleaning out whatever little salary is in your bank account. I made a commitment some years back to run only legitimate software without burning a hole in my pocket, usually by using non Linux FOSS on some of my machines and I can testify its possible. And of course I love and use Windows too; well sometimes.

The remaining big question is therefore: Will your current machine be able to run Windows 10?

To answer this question the folks at Microsoft have done two things. They have released a specifications table and an app. The specifications for Windows 10 are pretty ordinary so much that if your computer is capable of running any of the Windows versions eligible for a free upgrade your computer is most likely capable able of running Windows 10.

Once you have determined that you can indeed run Windows 10 on your current machine just make sure your PC has the latest updates installed. Follow the guide here to get the “Get Windows 10” shortcut onto your Desktop and you would be inline for the free upgrade.

Personally I prefer to wait and see other people try and fail, learn from their mistakes and upgrade once the inevitable gotchas are done and dealt with.

5 thoughts on “Will your computer run Windows 10?”