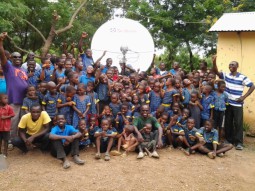 The latest population census counts 14 million Zimbabweans, 60% of these are in the rural areas. According to the telecoms regulator, POTRAZ, Internet subscription stood at 5,779,320 in 2014.  This is about 41% of the population. This means some 8 million Zimbabweans still don’t have internet access, despite the 90.3% mobile penetration.

Considering the urban versus rural dispersion, there is a higher likelihood that most of the rural folk have poor internet penetration statistics. This naturally means that the urban areas internet discussion is lesser about access and more about quality and services. This makes these unreached areas a priority for any Internet Service Providers(ISPs) and Internet Access Providers (IAPs) wanting to increase their revenues.

At the same time, at a national level, the state is bound by the International Telecommunication Union (ITU) guidelines and the SADC ICT principles on Universal Service; majoring on Availability, Accessibility and Affordability.

All players, led by the administration / regulator have a responsibility beyond profit making; to make sure all Zimbabweans have internet access. This is why POTRAZ would be engaged in programs to deploy base stations in some areas that make no business sense and is engaged in computerisation programs. It’s also the reason why state companies like Telone and Powertel are making strides connecting rural communities. The government’s Community Information Centers in this process acts as nodes or landing points somehow.

It’s also the reason why state companies like TelOne and Powertel are making strides connecting rural communities. The government’s Community Information Centers in this process act as nodes or landing points somehow.

How do you excite the rural folk?

In as much as the population has been identified as a potential and future customer, there is still the question of what a person in the rural areas would use the internet for, or if they are even interested in the internet at all. What are the services that they would need or can be induced to use.

To get a better appreciation of people’s needs, the population would need to be broken down into segments such as schools, remote hospitals and medical centers and clinics, general community, growth points, police outpost stations, local administration authorities (rural district councils), SMEs, tourism areas and agriculture. The use cases become apparent.

Schools need the internet to complement the learning experience, but they may not be aware of this resource if they don’t have it yet. Hospitals need to exchange information with referrals and perhaps decentralize information from the urban hospitals for research, training and skills enhancement and so forth.

At some point, the government may be able to decentralise the Registrar’s office and enable births registration, passport application, and other key documents remotely. Banks need to be connected to their remote branches realtime. The use cases are endless.

Will the rural areas be willing to use the internet? Can they afford to pay for it? Can an operator justify deploying VSAT? The business model would have to be viewed on a case by case basis.

Previously, due to the $1,500 licence fees, customers at any terminal would have to fork out at least $125 a month before even paying for the internet. This is in addition to the setup costs which are, for example, $670 for TelOne, with a monthly subscription of $51 for a basic data package. For a rural school, this is terribly expensive. With the new fees, at least the $125 is no longer an issue.

Another way to look at it is how this is an opportunity for startups to exploit. Consumption is also dependent on the content and Zimbabweans are willing to pay for good service and exciting content especially in entertainment.

Firstly there is opportunity to sell affordable smart phones; an area being ventured into by huge companies like GTel, Google’s Android One and Xiaomi of China.  The second opportunity is the content provision on those phones. Applications for example that show dancehall videos can easily excite the youths. Availing a center where these services are available is a possible business case.

The second opportunity is the content provision on those phones. Applications for example that show dancehall videos can easily excite the youths. Availing a centre where these services are available is a possible business case.

A third case is, of course, the provision of e-governance, e-health, e-agriculture services and so on which the users would get locally instead of traveling to the urban areas for. Imagine how simple it would be to confirm a grain payment from a growth point or school with internet.

Viability will also depend on the cost and availability of power. While the rural electrification program is underway, it is still far from reaching all the areas and the cost is still high. Power consumption from the VSAT terminal is not very high. In fact since many in the rural areas are already using various solar-ware they can easily accommodate internet provision.

It is no secret that new technologies are being developed for developing nations. Facebook is experimenting with a laser to beam internet from airborne drones in the Aquila project, Google is working on its Fi Project to network networks seamlessly. Even startups cognisant of African challenges are offering solutions such as the BRCK meant to provide backup connectivity where power is a problem.

These solutions may be an outright disruption in the future but at present VSAT has the responsibility of warming up the market and inducing the usage of the internet where it has not been used before.

So despite the very convenient fibre, there still seems to be very large population where the internet has not reached but its too expensive for mobile data and too costly for ISP to draw fibre. These areas are a good use case for VSAT and it looks like VSAT will be with us for a while before it becomes irrelevant.