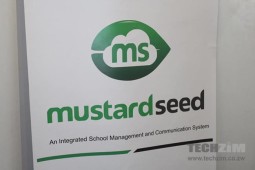 Technology has the power to change virtually every type of service and field, that much is pretty obvious. There are, however, certain fields that seem to require that transformative touch more than others – education is a good example.

There are numerous aspects of this sector that can potentially benefit from automated services and a distributed delivery of services through the power of the internet, something that explains the proliferation of various types of ed-tech startups.

One such startup, Mustard Seed, recently exhibited its platform at the e-tech Expo. According to Samson Chauruka and Kuda Mafutah, the two members of the Mustard Seed team that were at the expo, their system has been designed to offer more than just e-learning.

It allows schools to monitor every student and keep track of their performance in academic and non acdemic activities, while providing a solution for human resource monitoring and participation. Depending on the extend of enagement of the systems, these features can be extended to district, provincial and national monitoring.

An explainer video for Mustard Seed

Inspired by the national collapse

Before Zimbabwe adopted a multi-currency system, a lot of services in the country were at their lowest point and delivery was non-existent. Godfrey Marange and Kuda Mafutah, two Zimbabwean software developers based in South Africa, started exploring ways of improving the collapsed services back home.

Driven by a desire to give back to the learning institutions they had passed through and eying the potential in human capital investments, they focused their interests on education and in 2009 they created what would be the first version of Mustard Seed.

After spending close to two years modifying Mustard Seed in their spare time, their work caught the attention of two other South African based Zimbabweans (Ndaba Moyo and Bothwell Hlahla) who decided to join the team and provided funding while identifying business opportunities for the platform.

Mustard Seed generated significant interest among potential investors as well as prospective schools that were keen on integrating the platform with their existing school systems, something which prompted the team to explore the possibility of enhancing the system’s capabilities with options for district and provincial level data collation.

The other consequence of all this attention was the growing demand for server space, something that the team tried to solve by approaching Microsoft South Africa.

Representatives from the tech giant were impressed by the Mustard Seed platform and in addition to providing access to web resources they encouraged the team to apply for the 2014 Silcon Valley World Cup Tech Challenge where they participated as one of the 30 teams selected from around the world.

After qualifying as one of the 6 edtech finalists at the competition, Mustard Seed was signed up for incubation under Microsoft and provided with a $100,000 grant which has since been directed towards further development of the platform.

Success in South Africa and hopes for Zimbabwe

Mustard Seed has already been integrated with Microsoft’s Office 365, a tie up which has given it room to tap into other Microsoft services such as Skype, OneDrive and SharePoint which already have packages tailored for education enterprise.

This has broadened its appeal and offered a huge endorsement for the startup. As a result, it has enjoyed a positive response from both public and private schools in primary and secondary education.

Currently Mustard Seed has been incorporated by 5 schools in Gauteng Province, South Africa and it is exploring commercial arrangements with four other major technology firms including a national rollout strategy that involves one South African network operator. As an Office 365 affiliate it is now also being pitched to insititutions with similar needs in other parts of the developing world.

The horizons for Mustard Seed in Africa aren’t limited to South Africa, though. The platform was wholly inspired by Zimbabwean circumstances and as such, the team has been trying to make headway into the local education system.

To this end part of the Mustard Seed team (it is now comprised of seven guys based in Zimbabwe and South Africa) has dedicated part of its efforts into lobbying for buy-in from the Ministry of Eduication while prospecting for potential sign ups among local institutions. The team also engaged with the Ministry of ICT to identify how they can be a partner to the technology solutions for national education.

According to Samson Chauruka, the team lead for Mustard Seed’s Zimbabwean business development efforts, there has been a lot of interest shown by all the stakeholders so far and places of learning like the Harare Insititution of Technology are already keen on incorporating the solution.

Most of Mustard Seed’s functionality addresses several of the challenges that are being faced in student and school performance managemnt, something that has also been appealing for the Ministry of Education.

However, that clear enthusiasm is at the mercy of other challenges within Zimbabwe’s system of education. The availaibility of IT resources is not as prevalent as providers like Mustard Seed would want and there are still challenges with the necessary hard and soft infrastructure.

Added to this is the enormous need for the raising of an awareness on the effectiveness of technology in accelerating education. It’s these same challenges that stood in the way of an early implementation of Mustard Seed in Zimbabwe some 4 years ago.

Chauruka says that the landscape isn’t perfect, but there is room to set up systems like Mustard Seed and other relevant e-learning solutions.

Some efforts have been made to introduce basic IT hardware in schools and the campaigns for internet in public schools which are being run by Zarnet and the regulator, POTRAZ can provide a launch pad for the first adoption of large scale edtech solutions. With any luck, Mustard Seed belives that their solution can also play a part in transforming Zimbabwean education.