In the latest news on the popular instant messaging platform WhatsApp, the Facebook-owned company has announced that it is enabling end-to-end encryption for all of its 1 billion users on the latest version of the application, effective today.

This means that any type of message sent on WhatsApp in any form – be it text, voice, image, video, documents or calls – will only be accessible to the recipient with no other party, including the WhatsApp team, having access to it.

End-to-end encryption secures all messages with a digital lock, and only the sender and recipient have the special key needed to unlock and read the message. Each message sent will have a unique lock and key which ie enabled automatically.

Users do not have to do anything to access end-to-end encryption – as long as they have the latest version of WhatsApp, it will be enabled. WhatsApp has also stated that this encryption cannot be turned off at any point. 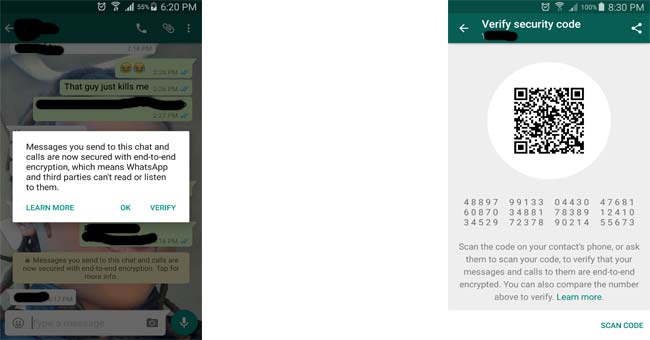 The end to end encryption also extends to Group messages, and just like other new features from WhatsApp, it only extends to the entire group when all members have updated to the latest version.

In a blog post published by WhatsApp to announce this change, the team highlighted the significance of this technological shift in limiting information access to only the intended users.

No one can see inside that message. Not cybercriminals. Not hackers. Not oppressive regimes. Not even us. End-to-end encryption helps make communication via WhatsApp private – sort of like a face-to-face conversation.

The rest of WhatsApp’s statement also touched on the much-debated issue of law enforcement compelling private companies to hand over privately held user data. This has been stirred up by the controversies around the United States’ FBI seeking Apple’s help in breaking into a phone to retrieve data.

Even though it’s focusing on encryption WhatsApp’s message is very clear. It wants to protect users’ privacy in every way possible, and the move to end-to-end encryption has managed to that for 1 billion people.