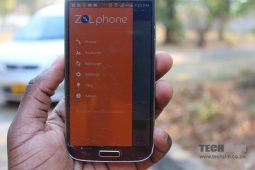 Called ZOLphone it’s a VoIP (Voice over Internet Protocol) product that works through a mobile app called ZOLphone that’s available for Android users (an iOS version will be available from the 1st of November, 2016)

In addition to the downloaded app, ZOLphone users also need $1 for registration plus a copy of their ID and a signup form.

The service works on any internet connection (you don’t need a ZOL Fibre connection to sample this) and like other well-meaning VoIP services, calling on the same network are free.

As far as tariffs go ZOLphone is charging 10c per minute to all local calls (including landline calls) while there are varying rates depending on international call destinations. The airtime vouchers for the service will be sold in Econet shops as well through online purchases.

This isn’t ZOL’s first foray into VoIP services. Its fibre to the home service ZOL Fibroniks has an accompanying VoIP service which the ISP has been pitching to residential users for a while now and in the past, it’s also pushed a VoIP solution to small businesses.

ZOLphone appears to be ZOL’s attempt to tap into a voice revenue opportunity that exists among users with internet access but are somehow willing to pay 10 cents a minute (locally, at least) to make that voice call.

“Willing” is the operative word there considering how Over the Top services that have come to resemble the internet (WhatsApp, Facebook and everyone else after) are offering voice communication services. Heck, even video has been thrown in now and it looks like it’s going to be a communications staple.

However, it apparently is a wholesome market, considering that ZOL’s only real competitor TelOne also launched its own VoIP service a few days ago.

Unless ZOL’s launch is a knee jerk reaction just to keep up with the Joneses’ the two entities are clearly trying to corner a specific market that still wants to pay to make calls through the internet.