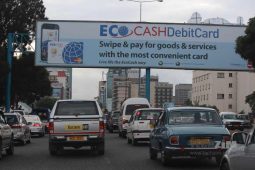 Mobile money service EcoCash has announced a reduction in the monthly transaction limit for its MasterCard Debit card from US$1,100 to US$500.

The information was shared with subscribers via SMS.

This follows another reduction announced in October this year which reduced limits from US$5,000 to US$1,100. The new limit is effective immediately and just like the adjustment made earlier this year it will be for all transactions – online and offline as well as local and international.

While no explanation has been provided as yet, this appears to be EcoCash’s response to the challenges it is facing in clearing international payments because of depleted foreign currency reserves in Nostro accounts.

With the country facing a shortage of foreign currency which has also manifested as a cash crisis for regular banking activities, such changes are likely to become the order of the day in the next few months as financial service providers are forced to limit exposure to international payments that require money to leave the country.

The EcoCash MasterCard has been a significant bridge between mobile money services and international payments. Any change to its limit will impact a lot of users, especially right now during the holiday season that’s characterised by travelling and a surge in retailing.

8 thoughts on “EcoCash lowers its MasterCard transaction limits again, this time to US$500”