In times like these you wonder, ‘what’s the point of social media?’ It is the convenience and cost savings we seek out but the package seems to come tied in with those who delight in causing panic. Like the joker, some people just want to watch the world burn.

For most who read the ‘news’ on social media that people can access other people’s EcoCash wallets without PINs, it was clear that it was fake news from the onset. Problem is that quite a good number did believe the fake news. They panicked, as they were wont to do.

Econet and various other news outlets assured people that they had nothing to worry about. The fake news continued to spread regardless. Econet has had to make statement after statement trying to convince people that a PIN is required for any transaction. The latest statement reads,

Kindly note that the short code on social platforms is false. Please disregard it as EcoCash does not allow access to people’s accounts without asking for a pin code. The *151*# EcoCash menu allows customers the convenience of instantly accessing the top level menu. Please note that all transactions on EcoCash cannot complete without a pin. A transaction cannot be successfully made using *151*#. It gives you an error message that reads General fail exception at the end. As long as you keep your PIN private there is no need to worry because with EcoCash your funds are always secure.

On Twitter EcoCash Zimbabwe has had to pin the following statement, 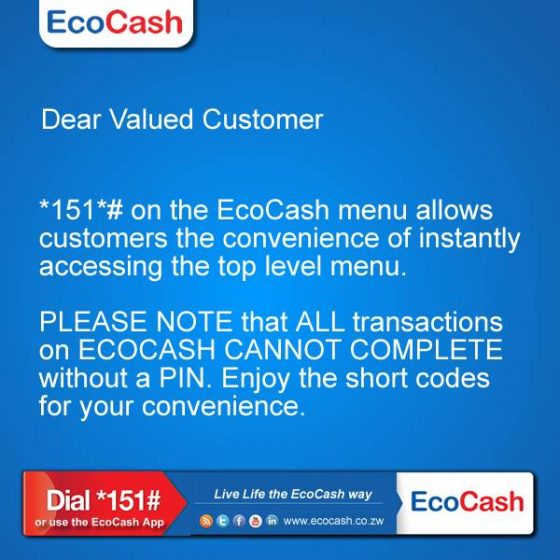 They should have sent out SMSs assuring people that there was nothing to worry about. That way they would make sure every single Econet subcriber got that message.

It could be that they did but those SMSs got lost in the clutter. Any Econet customer will tell you that getting multiple SMSs a day comes with the priviledge of owning an Econet line. You could unsubscribe to those SMSs but most have severe cases of ‘Fear Of Missing Out.’ It is times like these that you realise Econet has to change its SMS policy.

12 thoughts on “No EcoCash Transaction Can Complete Without A PIN”