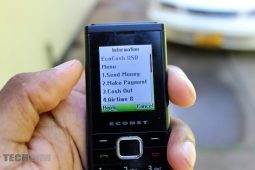 Mobile money transfer is now the preferred medium to conduct transactions amid cash shortages. The benefits that are afforded by using mobile money transfers platforms are now being weighed against frauds and scams arising as a result of using these platforms. But the increase of fraud and scams in fintech is not limited to mobile money transfer platforms. Yesterday’s article reported of a rampant rise in the cases of debit card cloning. Here are a couple of scams on the street where scammers are using the Ecocash platform.

Techzim just got a report from a certain lady who was scammed after she used Ecocash to transact. She said she bought margarine on the street and she transferred the money from her Ecocash account to a vendor’s Ecocash account. When she was waiting to be given the margarine, the vendor vanished from the scene.

Whilst this might seem like an easy and avoidable way of getting scammed, Techzim contacted Ecocash and Ecocash confirmed that many cases are being reported to them by victims who are seeking a way to retrieve their money.

Ecocash said that it is in the process of educating customers to avoid this scam by advising them to take hold of what they have purchased before sending money to the vendor’s account.

To solve this, Econet invariably calls the sender and the receiver to facilitate a dialogue between both parties and establish the facts. If Ecocash fails to resolve the issue and the conflict continues, it will then refer the case to the police to solve it and if the scammer fools the police into believing that he or she is right then the scammer defrauds the innocent party

However, this scam hardly succeeds because Econet does not reverse the transaction without thorough investigation.

Can Ecocash retrieve the money?

Yes, in some cases. The process of retrieving one’s money is a bit tedious because it involves engaging the police because the police are infamously known for their procrastination.

Regarding the first case, whilst the likelihood of retrieving the money after engaging the police is high, it depends on whether the scammer didn’t withdraw the money and use it otherwise you might end up apprehending the scammer but not being able to retrieve any money from him or her.

In the second scam retrieving money for the innocent party is almost impossible because cash burning is illegal so one might find that instead of arresting the money changer, the police would first arrest you.