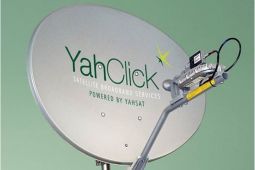 Nowadays when I go to launch events I am cautiously optimistic. After Kwese TV’s launch last year we quickly learned that announcement of a new product does not equate to a great offering that will shake things up as much as we anticipate. Zimbabwe’s internet landscape is another industry that also requires similar shake-ups and we believe competition is always necessary to drive costs down…

Local internet access provider Utande (a subsidiary of Dandemutande) has partnered with Yahsat to bring a new satellite internet solution to the Zimbabwean market. If you didn’t know, Yahsat also happens to be the biggest satellite internet provider across the African continent. The company is funded by the Abu Dhabi government and they have been launching their service in various countries in Africa over the past few weeks.

So, what should Zimbos expect?

Well, YahClick (that’s the name of the service) will resemble a DStv setup – a 78cm satellite dish will be set up at your residence along with a wifi modem to beam internet within the house. Utande has partnered with DStv’s installers and they will be the ones carrying out installations. Through these satellites, YahClick will deliver broadband internet via satellite across the whole of Zimbabwe.

Vsat has historically been a crazy expensive service to access. Utande and YahSat are hoping that YahClick shifts that and within a day or two they will be announcing their final pricing. Wait, what??? Before you close the page in frustration understand this; Utande had worked out a pricing scheme as far back as two weeks ago but unfortunately, the economy in the country had other ideas and they are now working on finalizing those prices to reflect what the economy is like right now. Though this is an inconvenience it’s something I understood was entirely out of their control.

What I can say definitively on pricing is that if you’re signing up for a 12-month subscription you’ll get the satellite dish, antenna and modem for free. If not there’ll be a fee charged for that kit.

There will be 5 packages for consumers to choose from with data caps of 5Gb, 10Gb, 20Gb, 30Gb and 50Gb. Unlimited gang will be left in the cold. Oh and how fast will these packages be? Well according to Utande CEO Never Ncube, expect anything between 6MB/s to 25MB/s.

Business packages will start at 75Gb and then there will be a 200Gb package along with two unlimited packages.

Because this is a satellite solution coverage will extend across the entire nation and there will finally be options for those consumers who want internet but are in remote areas. Speeds are similar regardless of where you are which is another positive.

Depending on pricing, I think YahClick has the opportunity to make a dent in remote areas where fibre and ADSL are not options. The technology is definitely cool and YahSat is a known and reputable player so I don’t expect there to be much in the way of service disruptions.

In other regions, YahClick offers what they call Unlimited Free Zone and this allows customers to access the internet at no cost from 1am to 6am. We asked whether this will also be available in Zimbabwe and it turns out that it will. A cool bonus for customers considering that ZOL and TelOne require you to pay for their discounted night data programs. If you’re nocturnal this will be a great addition.