I’m sure you remember that two days ago, Former Finance Minister sent Zimbabwe into a state of frenzy when he said that the government will introduce a new currency this week.

Although the Reserve Bank of Zimbabwe dismissed that claim that same day, The Herald decided to make a joke out of Mr Biti’s claim today with a very hilarious cartoon. Its so unfortunate that besides cryptocurrency enthusiasts, probably a few people will grasp the meaning of the cartoon. For me, I was (and I still am) in stitches for at least 10 minutes when I beheld the cartoon this morning. Maybe I have a very easily stimulated sense of humour, that’s why I found the cartoon so humorous. But just check it out 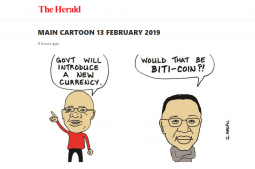 What the cartoon is saying?

The figure in a red top is Mr Biti making his claim. And the figure in the grey top is the current Finance Minister, Mthuli Ncube who is being sarcastic (whilst dismissing his claim) by asking the name of the alleged currency which he is calling Biti-coin. Biti-coin being a play between two words: Biti (for Mr Biti) and Bitcoin.