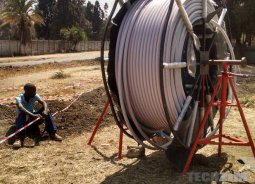 The DFA Zimbabwe operations are headed up by Simon Chimutsotso, a seasoned executive with extensive experience in rolling out telecommunications infrastructure in Zimbabwe, Zambia, and South Africa. According to DFA, an accomplished executive team will support him in planning and deploying the initial sections of the high-speed Zimbabwean network, which will be made available on a wholesale open-access  commercial offering.

Vino Govender, Executive for Strategy, Mergers and Acquisition, and  Innovation at DFA in South Africa says:

DFA had pioneered the wholesale open-access model in South Africa more than a decade ago and has demonstrated its viability by attracting leading mobile network operators, Tier 1 Internet service providers, and public sector customers as anchor tenants on their network. We have rolled out network infrastructure in all of the major South African metropolitan areas and have extended our footprint to large and small towns, amounting to over 13,000 km of ducting space. Our entry into Zimbabwe is in line with our strategic intent of expanding into sub-Saharan and other African markets.

Chimutsotso says that following the announcement of the expansion of DFA’s operations into Zimbabwe last year the team has spent the past few months working on feasibility and compliance readiness.

We now stand primed to deliver a reliable and cost-efficient open-access network and high-quality service, which underlines the DFA customer-centric values.

Chimutsotso adds that DFA Zimbabwe will build on the extensive experience from its South African counterpart to give, among others, Zimbabwean telecommunications operators and Internet service providers access to the same premium connectivity infrastructure that DFA South Africa is known for.

We are excited to build our customer base in this new territory and at the investment opportunity and value to be derived by the telecommunications sector of Zimbabwe and the economy at large.