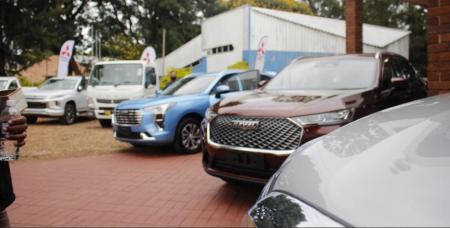 Day 1 of the Zimbabwe International Trade Fair was a little lacklustre. Most of the exhibitors were still in various stages of setting up their stalls and installations. However, by the time Day-2 rolled around things were truly up and running and in our travels, through the ZITF2022 exhibition, we were given a tour of the ZIMOCO stall which had every brand the company sells.

The showpiece car was the absolutely jaw-dropping Mercedes E53 AMG which according to the folks from ZIMOCO was already sold. The car sports an inline 6-cylinder engine churning out around 430BHP through a 4matic+ all-wheel-drive system and a crazy 384 pound-feet of torque at 1400RPM.

That’s not all that the company had on show on Day 2. They also had a wide range of the popular GWM P-Series trucks, I haven’t been the biggest fan of the GWM for the longest time. However, when I was taken through the specs, they are some pretty competent vehicles.