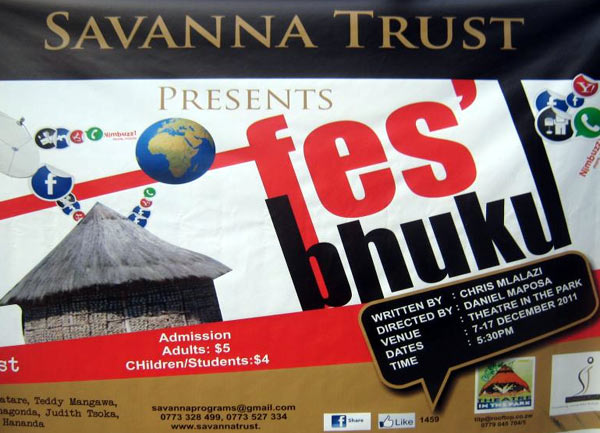 If you’re in Harare, you love theatre, and have an interest in the impact of the internet and social media on social and political issues, here’s something you’ll not want to miss: From 7 December (Yesterday) to 17 December 2011, a play called Fes’bhuku will be showing at Theatre in the Park in Harare. The term “Fes’bhuku” is a loan translation of “Facebook” into the Shona vernacular.

According to the play’s entry on Sha (itself a social network), the play was inspired by “the arrest of a Bulawayo man, Vikas Mavhudzi, for posting a message deemed offensive on the “wall” of a Facebook account purportedly belonging to Prime Minister Morgan Tsvangirai.”

The synopsis of the play reads:

Until recently, remote areas in Zimbabwe have been insulated from the rest of the world due to their inaccessibility physically and other reasons. With the advent of internet and e-mobile especially, rural folks have suddenly found the world at the tip of their finger tips. Social networking sites have become as popular in these areas as elsewhere in the world thereby giving the hitherto “invisible” rural folks a platform to speak and access world-wide views. Everything is now almost within reach.

However, such a powerful tool in the hands of anyone and everyone is bound to present interesting questions and scenarios. The play, Fes’bhuku, is based on this new social networking phenomenon. In the absence of specific regulation, how does this platform of expression impact on remote communities that are suddenly fast-tracked into “ownership” of this powerful tool. Or does it even need to be regulated seeing as regulating it would be tantamount to crafting and framing for the previously disempowered voices what to and not to say?

The setting is a rural growth point. Chance is new on Facebook and his past posts on Facebook have not be so clean so to speak, according to his friends and family. His wife has hidden the only record of his profile password to discourage Chance’s obsession with Facebook. Chance is oblivious of how to recover the password and is prepared to lose everything for its recovery so that he can do an important post.

Chance will stop at nothing to be heard. This is a hilarious piece laden with serious questions of expression in contemporary Africa within the new global matrix.

Fes’bhuku was written by Christopher Mlalazi and produced by Daniel Maposa. According to the event’s announcement, the play premièred at this year’s Protest Arts International Festival and it received rave reviews.