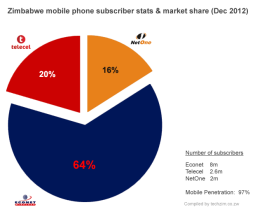 Postal and Telecommunications Regulatory Authority of Zimbabwe (POTRAZ), has released the December 2012 (4th quarter) mobile phone and fixed telephone subscribers statistics. According to statistics that we received from the regulator, Zimbabwe’s mobile penetration is now 97%, up from 85% in June 2012.

Econet Wireless, the largest telecoms company had 8,014,055 subscribers for the 3rd quarter of 2012. Telecel, the second largest mobile operator had 2,582,154 subscribers while NetOne, the smallest of the three, had a total 2,017,726 subscribers.

The subscriber statistics show the total active subscribers (SIM cards) on the networks over the quarter under review. POTRAZ gets the figures from the operators. The mobile penetration is calculated against the total population of the country, which is currently estimated at 13 million. 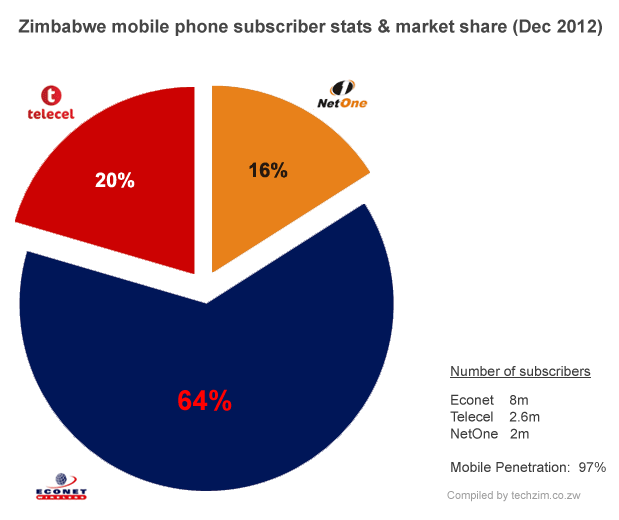 On the fixed line side of things, where a government monopoly, TelOne rules, active subscribers continue to decrease. The operator had 325,000 active subscribers in the last quarter of 2012, down from 373,000, revealed for the previous quarter.

Altogether Zimbabwe’s Tele-density has reached 100%. Tele-density measures the number of active mobile phone SIM cards and land-lines as a percentage of the country’s total population. This of-course doesn’t mean that everyone (including infants) has a SIM card or land-line  Just means the total number of subscriptions is now equal to the population.