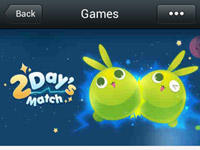 If you have been using WeChat lately, you probably noticed that the social messaging platform has added games. For some regions and countries at least. If you are in Zimbabwe for example you will notice there are at least 3 games now:  one galactica kind of game called Pencil Pilot (which i really liked), 2Day’s Match, Craz3 Match and another called Gunz Dash.

The once just a clone of WhatsApp is clearly much more than just  WhatsApp now. In terms of features at least. And it’s not just games, you can shake your phone to discover random people around the world also shaking their phones; you can discover people nearby, you can buy stuff on the platform; and if you’re in China, WeChat is your EcoCash and you can even use it to hail and pay for a taxi. That’s clearly much more than WhatsApp which to this day remains an SMS replacement with multimedia and group chatting features (which is a huge annoying source of spam sometimes, but that’s another discussion)

You could actually say WeChat is more deliberately working to be a Facebook replacement, something WhatsApp appears to not be interested in. In fact for those of you that have explored WeChat enough, you will notice it has what Facebook essentially is, a place to share life Moments with friends and have them like and comment on your photos. WeChat wants to be the first app you open in the morning.

Looking at all this, one can’t help wonder if WeChat, with all these features, is set to unlock stickiness to its platform, especially in markets where its still to overtake the more dominant Facebook and WhatsApp, or, its the case of more being less. There’s clearly something appealing about the one mindedness of WhatsApp, but if you’ve used WeChat’s discovery features or casually played the platforms Pencil Pilot, you’ll also agree there’s some additional utility to be enjoyed there.

Bloated or feature rich, we will likely know by the end of 2014. Last year, WeChat was just a new clone on the block. But they have clearly made a lot of progress getting known, and 2014 might be their dominate or be forgotten year. Or maybe just continue being third best.

What’s your opinion? Do you even use WeChat?

15 thoughts on “Now with games added, is WeChat getting more interesting or just bloated?”