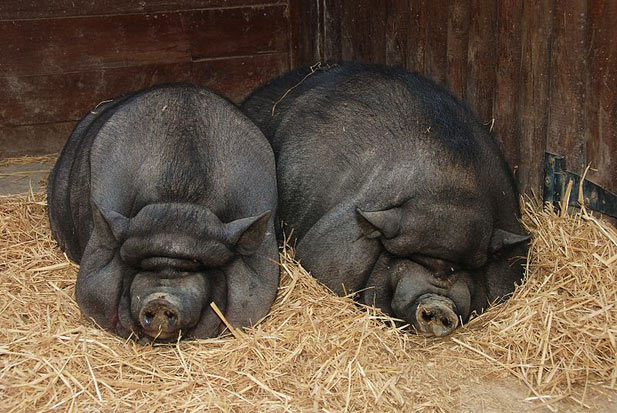 Because Pay Pal has continually requested that Techzim take down pictures containing its trademark, I’ve decided to put a picture of these two pot bellied pigs instead, no symbolism intended, enjoy.

Many Zimbabweans don’t buy the story that sanctions against Zimbabwe affect everyone, that is until they attempt to use PayPal with a Zimbabwean credit card. Only then do they suddenly become enraged and start spewing the kind of political rhetoric and conspiracy theories reserved for your favorite Sunday newspaper‘s opinion column. In case you have no idea what I’m talking about, PayPal will NOT process your payment if you are using a debit card or credit card registered in Zimbabwe. The reason? Sanctions.

Without the sanctions notice I guess PayPal can now play it off as some kind of technical issue right? Well yes, except for the fact that all you needed to do to fix this glitch was change your Zimbabwean address to another address from any other country and voilà your card would work.  PayPal has since upgraded the “glitch” making it impossible to use a card from Zimbabwe, period!  Having had enough of these sanctions, I decided to do what any responsible angry adult does, I took to Twitter.

@AskPayPal Why doesn’t Paypal work with Zimbabwean Visa Cards for every Zimbabwean in Zimbabwe? Sanctions Maybe? What a big shame

10 hours later PayPal responded to my tweet. Apparently they have nothing but regret. Really?

Did they just copy and paste this response from a template somewhere? Well at least this is PayPal’s first public statement on the issue. But I wasn’t done yet. I decided to be direct this time.

@AskPayPal When is Paypal coming to Zimbabwe?

UPDATE: Paypal finally responded to my last tweet in the typical P.R. fashion of a big condescending corporation. “We don’t have an exact timeframe on the expansion of our services to new regions, but we’re working hard to get there” they then put a little 🙂 at the end. Are they mocking me?

@tafmakura We don’t have an exact timeframe on the expansion of our services to new regions, but we’re working hard to get there 🙂 ^SC

While the Pay Pal response is immaterial at best, they deserve some credit  for responding to my queries, it should be worth something right? Maybe. To be fair, there are some unsanctioned countries like Nigeria that also have similar Pay Pal restrictions imposed on them. Could it really be a technical, legal or logistical issue and not sanctions after all. Who knows? Pay Pal could be doing everything they can to include more nations onto the platform without exposing their system to fraud or legal challenges.  Remember BBM?

That said, It’s really not comforting to know that our predicament is one which we share with countries like Iran, Afghanistan, Iraq and North Korea. To put things into perspective, even Somalia is Paypal ready. Oh well, Here is a sanctions busting alternative way to access Paypal from Zimbabwe.