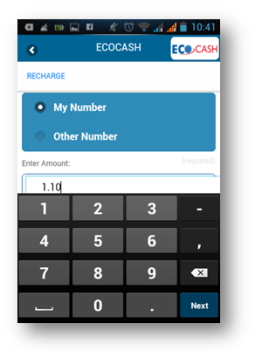 I am excited and disappointed at the news that EcoCash has finally released the EcoCash app. Excited because it was long overdue and this could be the much developer touted API.

Much to my disappointed is the calibre of application they chose to release. The application is a simple UI onto which you capture all the details you would normally capture at every *151# session response. The app then proceeds with the transaction by dialling the long USSD all at once and completes the transaction by a USSD prompt for user authentication. Simply put it is a USSD dialler that replaces the multiple back – and – forth capture and dial USSD sessions with a single step session.

Debatably, EcoCash App is one of Econet’s not-so-innovative products and it seriously deviates from the brand vivacity that they have set for themselves with previous offerings. I personally had expected exceptional standards, an application in the likes of Western Union or FNB App. This of course in the absence of an EcoCash App hackathon where developers could have come up with numerous alternatives over a three day marathon.

I say debatably because there must be business sense at EcoCash that supports perpetuating USSD centred services as opposed to internet based and USSD based equally, possibly for the reason that Zimbabwe has an internet penetration of less than 40%. This line of thinking is itself irrational against a backdrop reality that there is a very high influx of affordable devices from various initiatives that include Econet’s own device promotions and other low cost brands such as G-Tel , Karbonn and Astro available on credit terms.

Interesting to note, in fact that over 98% of the penetration refers to internet accessed through mobile phones and devices (GPRS/EDGE/2G/3G/HSDP). The inevitable truth is that in the short to medium term, there will be more than 50% internet penetration, via smartphones. Which then leaves us wondering why Econet had to release a “casual” app whereas it could have provided two releases, one in the manner they deed and another for the more than novice smartphone user if for nothing else but to maintain their rep. 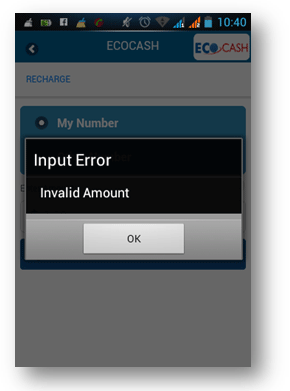 First of all, USSD is no longer the way to go. Yes, in Zimbabwe you will serve a large percentage of mobile phone users. That’s fair and fine but worldwide, considering that EcoCash is seeking to grow global with EcoCash Diaspora shortly, you would then expect that there is an EcoCash App version that caters for the more data mature markets.

Secondly (If anyone else has noticed) the application does not allow cents. Trying to buy airtime that is not a whole number returns an “invalid input” error. I suspect this is an oversight by their pilot product test team and they need to fix this.

Thirdly the “Next” button does not work after you input your details. You will have to escape from the keyboard screen back to the main application then hit proceed. There is no command level integration between the native keyboard and the app other than data capture. 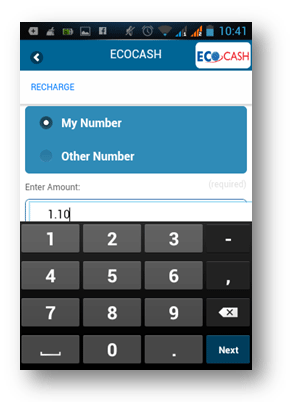 Fourth, EcoCash needs to add a merchant list and an agent list from which to select the merchant to be paid rather than type in the merchant code. I know many consumers face the same problem of searching for the MultiChoice / DSTv biller code each time they want to pay for Satellite. While on that subject, they need to educate consumers on the difference between an agent code, biller code and merchant code… what a headache.

Fifth, EcoCash needs to add capacity to save recurrent recipients; for example to add vCards for Merchants so they are added to an address book. From here I can then pay the merchant or recipient from a list or from my contacts.

Still no API
Coincidentally this matter reignites anxiety over the contentious API and whether or not the release of this application could be good signs that the EcoCash API is coming soon. As more and more consumers move to higher data consumption, more services and needs are going to be identified. These are not as generic as the “Eco” family of products to be offered only by EcoCash. Addressing some specifics from business to business requires going through a payment engine of some sort.

With the advances they have made in MMT, you would think EcoCash would be at the forefront creating a conducive and enabling environment for interoperability, perhaps not with banks but at least with other players. The added EcoCash traffic should be more than a bonus to them as it not only increases awareness but also identifies more ways in which EcoCash becomes relevant, entrenching itself as an everyday tool. It is not sufficient for them to lay a cobweb of optic fibre cables across the continent and forget to create peripheral lures to excite chatter around that same web.

Denying, delaying or withholding the API could seem trivial to EcoCash possibly considering their projections of demand from services requiring API connection viz-a-viz EcoCash’s own pace of and stage in development. However, it could also be reckless on EcoCash’s part as they stand to lose should the current booming mobile money ecosystem and start-ups find an alternative gateway in the form of Telecash or One wallet?

Why is Econet refusing to avail an API?

Whatever the issue is, EcoCash, and I suppose TeleCash should realise that they are doing the nation’s ICT development a disservice. They are not only stunting the growth of start-ups and established businesses but they are also denying consumers solutions that are required on a day to day basis. They are also party to the repudiation of the ideology of financial inclusion which they themselves started off preaching about especially in electronic and mobile commerce specifically and ICT in general.