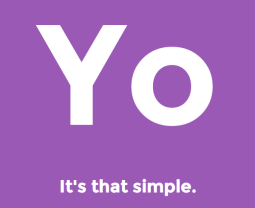 To paraphrase the Bible: There is an App for everything under the sun and an App for every activity under heaven. There is an App to App your friends with, there are exercise Apps, thousands of Bible apps, dictionaries, movie Apps and there is even an App that allows you to share leftovers with your neighbour; as if the guy ever needed an invitation to crash your party.

Although it is true that most Apps exist to solve a definite human problem some are just meant to be plain silly: take for example the Zipper App in the iTunes shop or the infamous flappy bird game.

Nine times out of ten whatever App you think to create you will find that someone has already created it: after all there is nothing new under the sun. Except the Yo App that is. Apparently the endless list of useless Apps in the iTunes  and Play stores lacked an essential functionality; the ability to send a “Yo” message to your friends.

The Yo App allows you to click on your friends name in very much the same way that you do in WhatsApp to start a conversations. When you click a friend’s name they receive a voice message that says “Yo!” in a tiny robot like voice. That’s all there is to the Yo App, it does not allow you to save data, make VoIP calls, call God or anything-it just allows you to Yo!

This feature is not too dissimilar from the Facebook poke feature that allows you to “poke” your friends. The reasons for the both services appear to be very similar also. According to the creator of the Yo App the “Yo” message is an overloaded message that could mean anything to two people.

It might be just a way to get your friend’s attention or it might mean “Hey!”, “Hi”, “Don’t forget to feed the cat.”, “I got home OK.” or you could just be celebrating a world cup goal. It reminds me of the way people used “Call me back.” messages before network mobile operators decided to clamp on them. It is said small house lovers  would send special coded messages that even the most alert wife could not decipher.

Critics and reviewers have called it “pointless” and while some experts have deplored its rise in popularity as a sign the world’s “civilization is declining.” But that has not stopped people from joining the mindless fun by downloading and installing the App.

According to Business Insider the app’s usage has grown from 60 000 to over 1 000 000 in the past week alone. The creators have also received $1.2 million dollars in funding. Every Zimbabwean developer would kill for such growth and funding. Here you would be lucky to receive a $1 in funding and even the EcoCash service never experienced such growth.

The App is not a paragon of coding either. It took a mere 8 hours to code according to the creator- that would make sense given the limited functionality and the recent ensuing security flaws. Let this be a lesson to our Zimbabwean coders: the popularity of an App does not vary directly with its code complexity.

For an app to be popular it has to fill a void and have a “sell point.” According to the developer whilst the Yo app allows you to send a Yo message using a single tap on the desired contact’s name, doing the same using previously existing apps such as WhatsApp would take a mind numbing 11 steps.

I first came across this App when my evil plan to match the Brazilians and the Oranje fell through. After installing the application you can get a Yo message every-time a goal is scored in the world cup by adding the user name “World Cup.”

In the spirit of non-communication that is exhibited by the app everywhere, you will not be told who has scored, for what team or what the scoreline is-pretty stupid if you ask me. I got five Yos only to discover that the Samba boys had topped their group and Cameroon had scored only one of these goals.