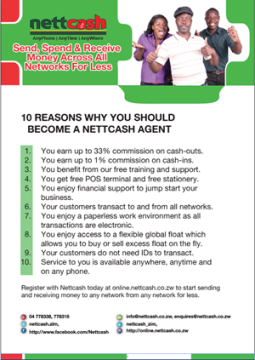 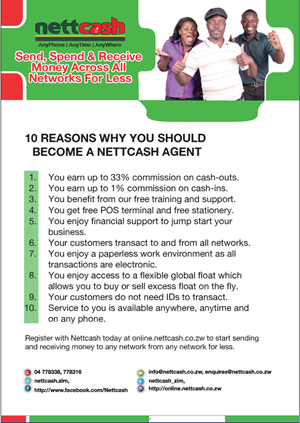 Some months ago we wrote about Nettcash and their official launch in the Zimbabwean mobile money space.

The independent service was applauded as a sign of healthy competition in a market dominated by mobile network operators.

Since the launch the mobile money landscape has gone through significant changes, with the different service providers noting significant growth in numbers.

There have been product additions launched by EcoCash and telecash, the two biggest players in this space, and mobile money has started incorporating money remittances.

On its part Nettcash has been aggressive in maintaining strong brand visibility judging from the extensive ad campaign it has been working on.   It has also made its API public in an attempt to engage entrepreneurs keen on engaging in e-commerce.

By putting an emphasis on these factors and playing its strength as a network agnostic service, it still hasn’t escaped from the realities of mobile money service growth.

Success almost always calls for a strong agent network where users of the service can conveniently send and receive money. This reality has in the past led to a scuffle for agents which culminated in a mobile agent war.

Currently Nettcash has enjoyed agent representation mostly through the local postal network, independent retailers and service providers. Its hardly any different from what the other players are working with in the field. Nettcash’s own solution for the agent growth challenge is the use of Mobile Money Brand Ambassadors.

We haven’t established what sort of commission Nettcash is offering to individuals who will take up this role and how lucrative the opportunity is when compared to just being an agent, Nettcash hasn’t been too generous with those details.

According to Nettcash these will be individuals in different communities who will help grow the agent network by recruiting individuals to act as the agents. It seems Nettcash is looking for a cost effective way of establishing a larger footprint throughout the country.